What is My Dog Thinking When He Stares at Me? 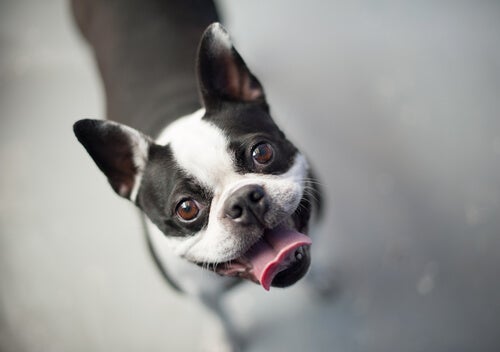 It is very common to be doing things at home, or resting on the sofa, when suddenly our greatest admirer appears before us: our dog. We don’t know what’s wrong with him, but he’s constantly staring. What is he thinking when he stares at me?

It’s normal to ask yourself that question, because even though you know your dog well and already know he’s not going to do anything to you, when you adopt a dog with already acquired habits and this happens, it isn’t so easy to stay calm.

Obviously, dogs don’t think in a rational way like we do. But, there are reasons why they look at us that way. Would you like to know them?

Why is he staring at me?

There are five reasons why dogs tend to do this. We’ll list them here.

Being so busy with things to do during the day means you almost never look at your pet, and he realizes it. What’s he doing to let you know? He’s staring at you. He wants to get your attention. He wants you to know he’s there, and that he needs your love. He’s not demanding to play; he just wants to be petted.

Try giving him what he needs, and you will see that he relaxes, and will stop staring at you until another occasion.

He wants to ask for something

We would love for our dogs to talk, but they don’t. So, their way of asking us for things is through gestures and body language. You should be able to know what your pet needs by judging according to the time of day and by what you know about him.

Maybe he only wants more water, or for you to open the door to the terrace. There are dogs who help you out with sounds and movements, such as moving the water dish, for example.

Perhaps at that time you’ve given him an order, for some days in a row, but now your dog has been waiting a long time doing nothing, and so he stares at you, awaiting your instructions.

Also, this might happen when you are training him or teaching him new orders. The dog recognizes his submissiveness and expects you to give him new orders.

Sometimes dogs are unsure what we expect of them. They stare at us in case we make a sign or gesture that indicates what to do.

They don’t want to miss any details, and are always alert to our wishes. Aren’t they the most loyal and noble animals ever?

This is a look that we must learn to recognize. Dogs don’t tell us much with their eyes, but they do use body language. Therefore, don’t assume his staring is normal, without first studying his language thoroughly.

We know that you know your dog, and that you don’t think he could be aggressive, much less with you, but sometimes canines suffer from disorders that can turn them against us.

For example, some breeds are predisposed to schizophrenia, and have attacked their owners on many occasions. This doesn’t mean that it happens to everyone, but we do recommend you be on the alert and watch for any alarming situation.

These are the main reasons why your dog stares at you, up to the point where it can sometimes make you uncomfortable. What can you do? Not much; he will keep staring. However, be mindful of his needs.

Give him affection, provide what he needs at all times, and be attentive to when he wants to go out, exercise, or when he simply wants more attention.

Understanding our pets isn’t hard, if we work at it. As of today, you know a bit more about yours.