The legend of the swallows and the thorns of Christ 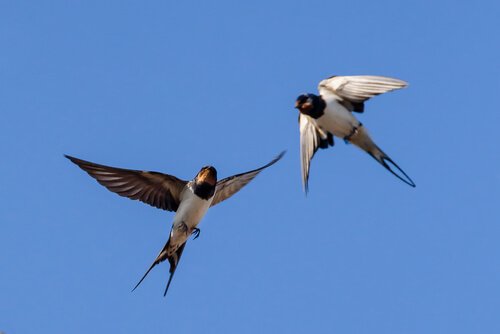 After being arrested and tortured, Jesus Christ was given a crown of thorns. According to popular belief, a group of swallows began to remove the thorns after he was crucified and alleviated his suffering. Hence they are considered to be sacred animals.

The relationship between swallows and the thorns of Christ originated when the Messiah was on the cross. The legend has stood the test of time, and these beautiful birds are now associated with religious beliefs.

According to the biblical account, Jesus of Nazareth, recognized by his followers as the Son of God, was sentenced to death. The Roman justice system condemned him to be crucified on the hill at Calvary because of his preaching.

Before carrying out the sentence, Jesus was tortured by whipping. According to the events recounted by the apostles, a crown made of thorny branches was placed on him.

It is said that while Jesus was crucified, swallows approached and removed the thorns from the crown. Popular belief says that they relieved his pain. This claim has served as a basis for the high esteem some cultures have for swallows.

Another biblical reference but of an apocryphal gospel was written by the pseudonym Tomás. This legend tells us that Jesus, still a child (barely five years old), was playing in the bed of a stream one day. He made a soft mass of mud and formed twelve swallows out of it.

The believers’ respect for swallows

After the event on the cross,  swallows came to be considered sacred and were respected. It even led to the prohibition of killing them or destroying their nests. Some say that “swallows are of God.”

The legend of the swallows and the thorns of Christ even explains the anatomy of these migratory birds. Believers contend that their backs are black in mourning for the death of the Son of God. In addition, they contend that the red spot on their chests is there from the spilled blood of Christ when the thorns were removed.

Swallow nests enjoy special respect and protection. Therefore they are not usually destroyed or removed and so they abound in many places, mainly in church buildings.

Although they are small birds, swallows usually fly during the day, running the risk of predators hunting them. In addition, they are migratory birds that fly in groups.

Swallows live together in colonies, which helps them with their migrations and also provides a bit of protection. This coexistence in colonies also helps with reproduction and the building of nests.

Swallows’ habitats are usually spacious areas, which they use as sleeping spaces. They are early morning birds and brighten the day with their unique songs. They can reach very high notes.

In the mornings, as if they were stretching, they move their wings in an interesting way. They stretch the feathers and their little joints, a happy way to say hello to the new day.

When they set off to fly, they do it in small groups, then the rest of the group will catch onto the game quickly, almost like a stampede. They rise vertically in a remarkably fast way.

At the end of the day, they look for a place to sleep. In the search, they make a kind of whirlpool with the group, singing songs. One by one, each little bird will arrive at its resting place and their daily adventures will wait until the following day.

One of the legends associated with swallows and the thorns of Christ is native to Guadarrama, Spain. It’s not known for sure if it was created or chronicled by the poet Francisco Acaso, a native of Cercedilla.

This legend says that the first bird that removed a thorn from Christ’s forehead later flew great distances with it. He traveled for 3,600 kilometers without losing the thorn, from Calvary to the Sierra de Guadarrama.

Finally, the exhausted swallow arrived at the top of a hill, where it died and was covered by the earth of the pasture. That’s the reason that this place in Navacerrada (Madrid) was christened El Cerro de la Golondrina (Hill of the Swallow).

Link copied!
Interesting Articles
Birds and Lovebirds
Feather-Plucking - My Parrot is Pulling Out Their Feathers!

Birds and Lovebirds
The Amazing Cognitive Abilities of Parrots

Bird intelligence is evident in corvids, but many species in the group of parrots also stand out for their amazing…

Many consider pigeons a plague due to their proliferation in cities. In fact, some people even develop a true phobia to their presence. However, home pigeon keeping continues to conquer…