War Veteran and Service Dog Both Employed by Shop 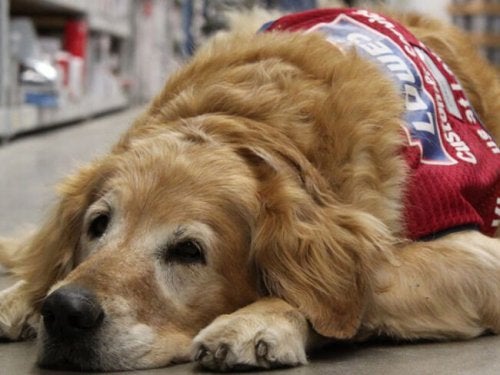 There are so many stories about soldiers and dogs who have helped each other in horrific times, whether in the midst of battle or in its aftermath. This story is about a veteran who’s been employed in a shop — along with his assistance dog! What wonderful news for them both!

A war veteran gets a job with his dog

Clay Luthy, a war veteran, had been turned down by many businesses because he has an assistance dog. However, after a long search, a hardware store finally gave him a job… and his dog too!

It’s very hard for many former military to find a job because of their disabilities or injuries. This is especially the case if they have an assistance dog. In many countries people in this situation are rejected straight away when they apply for a job. Employers think an assistance animal will be a distraction, get in the way, or bother customers.

The good news is that now increasing numbers of businesses are deciding to employ people with disabilities. Lowe’s Home Improvement in Texas is one such business.

The store employed Clay along with his assistance dog, Charlotte, a golden retriever. The story came to light after a customer posted a photo of the two employees going about their working day.

The caption beneath said: “This is a disabled vet who struggled to get a job because he needs his service dog! Lowes hired them BOTH!!” Obviously, it immediately went viral and spread around the world.

Clay served in the U.S. Air Force for many years, but after multiple knee surgeries, he wasn’t able to re-enlist. As a result, he needed to find a job. The problem wasn’t so much his disability, but the fact that he needed his assistance dog 24 hours a day.

During his interview for a position at the hardware store, the veteran explained to the store supervisor that Charlotte’s behavior was impeccable. She was a very calm and sociable dog who wouldn’t cause any problems. It was her job to help Clay.

The store decided the dog should have something to identify her in the store. So they made a vest for her with the store’s logo, just like her owner’s. Since Charlotte’s behavior was so good in the first two months, Clay decided to bring in another dog to help him. The new dog is 6-month-old Lola, who’ll soon replace Charlotte because she’s already 10 years old and due to retire.

Another story about war veterans and dogs

The dog in this story is named Treo, a black lab, and it’s quite a moving tale. Dave Heyhoe was a sergeant who began serving in the Cheshire Regiment in 1986. In 2005 he became a trainer for sniffer dogs, used to detect weapons and explosives.

Three years later, they went on a mission to Afghanistan and for 36 months they were inseparable. They had become best friends. When Dave retired from the forces, he took Treo home, considering him a part of the family. (He had a wife and three children).

In 2010, the British Army awarded Treo a medal for bravery. He had prevented the deaths of tens of soldiers by finding multiple devices in Helmand Province.

Some time later, at 14 years old, Treo died. The loss devastated Dave, and he wanted to pay tribute to Treo’s life. He had a tattoo done of Treo’s paw print and below wrote these heartfelt words:

“I will lay down my life for you and expect nothing in return.
I protect my dad with my life, and would gladly take a bullet in his place.
I find weapons and bombs.
I am the first sent in and sometimes the last to leave.
I am the nose and ears of my Dad.
I protect and serve him.
I would die for him and you.
I only ask for compassion and a kind word.”

Link copied!
Interesting Articles
Dogs
Which Dog Breeds Are Most Likely to Run Away?