Why Do Dogs Sneeze?

Sneezing is an involuntary reflex when foreign bodies irritate the nose. 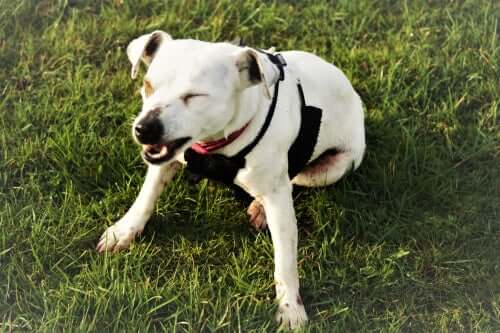 Dogs are very playful. They have a lot of energy and barely stay still for long. That extra liveliness makes us believe they won’t get sick, and so when they suddenly sneeze it startles us. However, dogs sneeze for many different reasons, as we’ll see below.

Neither cats or dogs can sweat through their skin, like humans can. Therefore, the respiratory system helps to regulate their temperature.

The following make up the canine respiratory system:

Different factors affect the respiratory system. This makes way for respiratory diseases. One of the most noticeable symptoms of this type of disease is usually sneezing.

Before continuing, it’s worth answering the following question: what is a sneeze? Well, it’s an involuntary reflex action. That is, it’s a sudden, forced and involuntary explosion of air that’s expelled through the nose and mouth.

Why do dogs sneeze?

Sneezing happens for various reasons, including the following:

An allergy is when the body reacts to an allergen. It isn’t dangerous but the body recognizes it as foreign and acts against it. Among the different types of allergies, the most common one in canines is atopic dermatitis (eczema) or atopy.

Eczema is a genetic weakness that causes inflammatory disease. Common symptoms are itchy skin along with sneezing and nasal and eye discharge. If the disease isn’t detected soon, it will turn into skin lesions.

In atopy, the body reacts against non-harmful substances, producing antibodies to combat them. Other main allergies include:

Vets can prescribe hypoallergenic shampoo to alleviate itching and skin discomfort. If symptoms are more severe, you may want to consider prescribing an anti-inflammatory treatment.

If a dog is exposed to low temperatures, it can catch a cold. The most common symptoms in dogs are eye discharge, cough, loss of appetite, lack of interest in playing, or sneezing.

Luckily, most dogs can fight off a cold without needing treatment. In these cases, owners need to make sure their dog stays hydrated, warm and only take them on walks in warmer weather.

Sometimes, a cold can be confused with a highly contagious canine disease called distemper. However, while distemper is caused by Morbillivirus, a cold is a bodily reaction to a change in temperature.

A bacteria called Bordetella bronchiseptica bacteria causes the infectious tracheobronchitis disease in dogs. Also known as kennel cough, it has cold-like symptoms, including sneezing, discharge, or loss of appetite.

Tracheobronchitis can also be caused by fungi, viruses, or parasites. It’s a highly contagious disease but it can be cured easily.

Some dogs sneeze when they’re happy or excited, normally when they greet their owners. They can also sneeze when playing with other dogs.

Dogs wrinkle their noses when they’re happy which makes them sneeze. Therefore, if a dog sneezes when you enter your house, it means they’re pleased to see you.

Sneezing itself is simply an involuntary act. Therefore, when a dog sneezes, it isn’t dangerous.

However, if you notice that your dog constantly sneezes and is showing other symptoms, take it to the vet for a checkup.

Skin Allergies in Dogs – Symptoms and Treatment
Do you suspect one of your dogs might have skin allergies? They might if they're displaying certain behaviors such as excessive scratching and grooming. Read more »
Link copied!
Interesting Articles
Dogs
The Dogs that Protect Wild Animals