Due to sport hunting and consumption of this animal, there's now a need to breed this mammal. It comes from the same family as pigs. In fact, some people have crossbred the animal to improve its flavor. 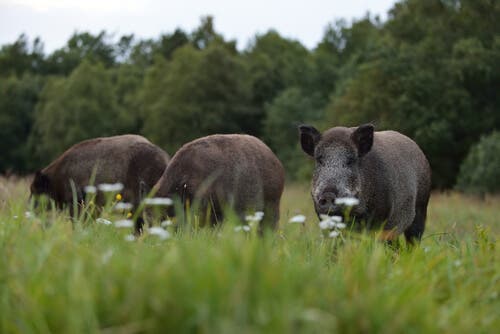 As this animal is from the same family as the pig, breeding wild boars domestically is similar to breeding pigs. They require appropriate food and must be in heat in order to breed. Both males and females can become sexually active one year after birth.

Domestic farming of wild boars is a new activity. The main goal of breeding wild boars is to use them for sport hunting or human consumption. In the case of the latter, some farmers have crossbred wild boars and pigs to get more flavorful meat.

Wild boars are actually a very docile animal, unlike what many people believe. In fact, another reason for their breeding is to interact with humans on farms.

In their natural habitat, female boars tend to have young in nests. They make these nests at the base of trees or next to water sources.

However, in the domestic breeding process, there needs to be sufficient space for mating and gestating. This space should be large and clean. It should also be a place where the animals feel free since these animals are used to long walks.

Likewise, you’ll need a structure to keep the animals in the area. We also recommend that you include a water source, such as an artificial pond.

The female boar is sexually active one year after their birth or when they reach 65 pounds. They can reproduce throughout the year because heat begins at the end of each lactation period.

Heat lasts between 20 to 23 days. One male is capable of fertilizing up to three female boars during this time. However, the best reproduction period occurs during the summer.

Wild boars are omnivorous animals. They feed mainly on vegetables, seeds, grains, and roots. They also eat carrion, worms, and eggs. However, during gestation, feeding is important for females in captivity. It’s important to ensure that they consume the necessary amount of food. In fact, acorns can be a complete nutritional source for boars.

A female boar’s pregnancy lasts approximately four months. Then, each litter can be from four to six piglets. However, in cases where the female is larger, the litter can be larger. On the other hand, the brood mortality rate is 18 to 20% during the first year of life.

Another characteristic of the litter is that the sex of the offspring is usually 50% male and female. Additionally, boars live in a herd during the first year of their lives. Then, they remain on the periphery of the herd until they’re adults.

In their natural habitats, wild boars are intelligent animals. The herds are matriarchal where one or more female boars lead. Adult males join the herd only during the rutting season. The rest of the time, males live alone.

Breeding wild boars as a business

Domestic boar farming has become a profitable business. The interested public is mainly made up of hunters and restaurateurs. Nowadays, boar meat is considered an exquisite food that sells for a high price.

Additionally, in some of the higher-yielding farms, farmers have crossbred the boar and the domestic pig. This practice has improved the condition of the animal’s meat. It has also improved the texture and flavor, which can be very strong.

The largest investment required to breeding wild boars is the space for its reproduction. Because they’re omnivores, they don’t require high-cost specialized meals. However, a supply of vitamins improves the conditions of pregnant females.

Ears, tusks, and sense of smell of wild boars

Wild boars have an outer appearance that’s similar to a pig. However, their bodies are more stylized and have long legs. These animals have poor vision, which they make up for with hypersensitive hearing and sense of smell. In addition, many people consider this animal to be intelligent, and to have an excellent memory.

One of the main characteristics of wild boars is their tusks. These protrude from their jaws and are longer in males than in females. However, they also have sharp canines, which they keep sharp by continuously opening and closing their jaws.

All About the Wild Boar
The wild boar lives in a herd and they're very social animals by nature. They usually travel around led by one or more females accompanied by their young. Read more »
Link copied!
Interesting Articles
Cows
Is It True that Cows Have Four Stomachs?

It's impossible to understand the history of mankind without taking a look at extensive livestock farming. For thousands of years,…

Ethology is the science that studies animal behavior from a biological but also psychological point of view. That is, this…