Draft horses are hardy animals that have been specially bred for their strength and endurance. Today, we'll be taking a closer look at the Belgian draft horse. 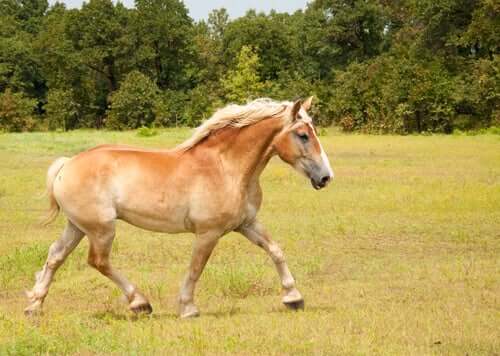 The Belgian draft horse is an ancient breed that originates from Belgium. There, they’re bred according to strict guidelines that have been passed down for generations.

These specialist breeding techniques have meant that Belgium has gained global recognition in the equine world.

In the past, draft horses typically served as a means of transport. However, they were also used for agricultural work, helping to plow the fields.

Belgian draft horses require expert care, especially when it comes to their diet, as they need to consume large amounts of calories when working. Plus, it’s important to protect their cannon bones (or shins) to prevent any accidents and injuries.

The origins of the Belgian draft horse

Also known as the Brabant or Brabander, the Belgian draft horse dates back to the 17th Century. At first, it’s thought that there may have been three distinct types of Belgian horses.

Due to their similarities, experts believe they’re a descendant of the Ardennes horse. Like the Brabant, the Ardennes is a robust, hardy breed, which we can trace all the way back to the time of the Roman empire.

In the Middle Ages, the Belgian draft horse was known as the Flanders horse. It was the predecessor of the English Warhorse, as well as a number of other British heavy horse breeds alive today.

The Belgian draft horse was officially recognized in 1886. From then on, the quality of these animals improved dramatically. Their new-found prestige meant that people quickly began to export the breed worldwide.

Modern-day breeders are making efforts to conserve the breed, making sure to maintain birth rates and keep the bloodlines pure.

Plus, the Belgian draft horse also plays an important role in strengthening and improving other breeds.

As well as physical care, the Belgian draft horse is a breed that requires great attention and dedication. Due to their sensitive personality, they require an understanding, sympathetic attitude from their owners. In return, these animals offer their loyalty and goodwill.

When it comes to their diet, the Brabant is known for its huge appetite. When not working, they can usually eat a basic diet of grass and hay.

Working horses, on the other hand, will require an extra daily portion of food. If necessary, owners can supplement their diet with vitamins and minerals.

Superficial wounds are very common in draft horses. If not treated quickly or effectively, these injuries can cause serious long-term damage.

If you notice your horse has any kind of injury, you should treat them immediately with healing and antiseptic creams. These should be able to stick to the skin regardless of the weather or any physical activity they might do. If you’re in any doubt, always consult with your vet.

The Percheron: The Samson of the Horse World
In this very interesting article, learn all about the Percheron horse, a very strong, elegant, and hard working horse breed. Read more »
Link copied!
Interesting Articles
Horses
The Essential Nutrients Every Horse Needs