Lobo's Unconditional Love For His Owner In The Hospital 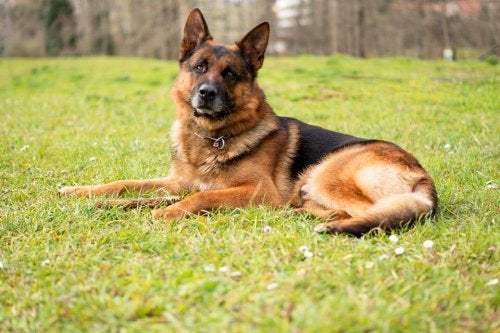 When a video is uploaded online with images of a dog’s love, it’s more likely to go viral immediately. This was the case of a video showing Lobo’s unconditional love. This beautiful German shepherd was reunited with Rodolfo Castillo, his owner. At the time, Rodolfo was at the Marqués de Valdecilla University Hospital in Santander, Cantabria.

Rodolfo suffered from a spinal injury resulting in a sore on the sacrum. Because of this injury, he stayed in the hospital for 2 months. During that time, he was unable to see Lobo who is not just an assistance dog, but a great friend.

For this reason, emotions overcame all who were present when the furry companion visited Rodolfo. Lobo’s unconditional love was expressed with slobbery licks all over his owner’s face.

“This reunion was therapeutic and refreshed my batteries,” Rodolfo said. He added: “We spent too much time apart, and missed each other.”  Originally, Rodolfo expected to stay in the hospital for 10 days. However, due to a complication, he had to stay longer.

The history of Lobo and Rodolfo

Rodolfo and Lobo have been inseparable for the past six years. But, time has not diminished their affection. He personally trained him to become an assistance dog. “It’s as though he became my hands and legs. If I am not with him, I feel naked,” he explains.

15 years ago, Rodolfo was in a traffic accident that left him in a wheelchair. Besides not being able to walk, he cannot move his left arm.

So, the dog is his companion and helps him with different activities. From switching on the lights, to warning him about the edge of a curb, Lobo’s unconditional love is endless.

How much can a dog love someone? That’s hard to measure. But if you can’t put it into words, here is the story of Lobo. This dog feels unconditional love  for his owner, Rodolfo. Lobo was happy to visit Rodolfo in the hospital after two months of separation.

Currently, the legislation of Cantabria does not authorize the presence of animals in health institutions. So, Lobo’s visit was the first exception, as the issue is currently on the agenda of the authorities.

The relatives of Rodolfo and the nursing team were very happy to be witnesses of this special reunion.

When Lobo’s leash was removed, he went into the room where his owner was staying. Then, he went directly over to the wheelchair and sniffed it. In the meantime, Rodolfo watched him from under the sheets.

But he couldn’t hide for long! Lobo immediately saw his owner on the bed and pounced on him. He quickly covered his face with happy licks expressing his unconditional love. In the meantime, Rodolfo stroked his fur tenderly and said, “Such a long time! I haven’t abandoned you!”

Here are some images of the long-awaited and joyful reunion.

Rodolfo left the hospital, and Lobo is happy

Separating Lobo from his owner again was not easy. They had to pull on his leash to get him out of the hospital room. But luckily, Rodolfo went back home. And little by little, he is returning to his normal life alongside his faithful dog.

Meanwhile, Lobo cared for Rodolfo’s family and friends. However, the absence of his owner caused him great sadness. Many nights he would wait for him until the wee hours of the morning on the access ramp of the home.

Rodolfo plans to become a dog trainer in the near future. For now, he is enjoying the company of his great friend Lobo, and continues to bask in the dog’s unconditional love. He is also happy to be on the road to recovery.