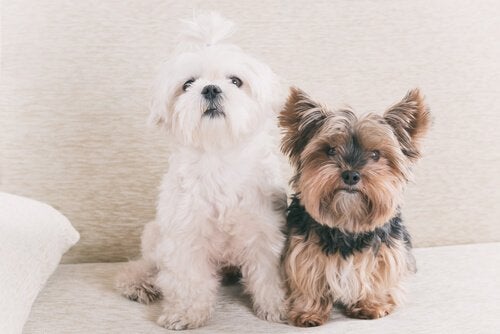 Throughout our lifetime, we have repetitively heard people say that one dog year equals seven human years. Since this statement is considered to be true, we often repeat this statistic. However, where does this information come from? On what evidence is it based on? Today, we will examine the myth versus reality on this subject.

Why is the saying that one dog year equals seven human years considered to be a myth?

The one dog year equals seven human years rule became popular during the last century. Nevertheless, no one has claimed ownership over this statement. So, we are definitely facing a myth. Let’s try thinking about this false axiom.

The first thing that needs to be looked at is the form and speed of a dog’s aging. A homogeneous criterion cannot be set due to the large amount of existing breeds.

As matter of fact, this is what has always been said:  you cannot measure everything with a ruler. After all, we are not the center of the world. Dogs and humans grow and age differently. So,trying to match both is a big mistake.

The belief that one dog year equals seven human years seems to be true. It is repeated often without being verified. In reality, it is a myth of unknown origin. The truth is that canines age at a different speed than humans, based on their size and breed.

Reasons to debunk the 7 to 1 rule, or vice versa

Below are the reasons why it should be considered a myth:

How to calculate a dog’s age compared to a human

Here are some examples to give a more precise explanation on age difference between humans and dogs:

So, stop clinging to the belief that one dog year equals seven human years. This type of thinking can lead us to make wrong decisions regarding our pets.

Above all things, remember that the development of a dog’s life is not linear, and it changes depending on their size and breed.

Therefore, it is best to check with a veterinarian. A professional is much more qualified to give advice about how to properly take care of your pet during each stage of life.

After all, nothing is guaranteed in life. That is why it is important to love our four-legged friends daily.  No matter how long they live.  One thing that´s true: your dog would care less about the age of his owner!