Home » Animals » The Collared Anteater: All About this Species

The Collared Anteater: All About this Species

The collared anteater is a typical species of South America. It dwells mostly in arid forest regions and savannas.It is also called the Southern tamandua. 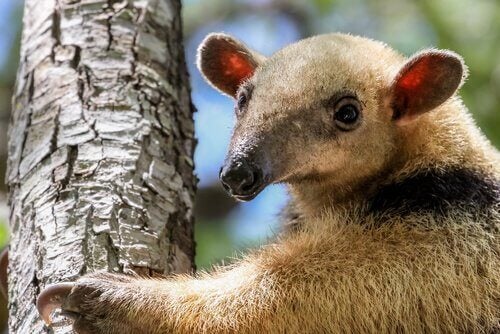 The collared anteater is a typical species of South America. It dwells mostly in arid forest regions and savannas. It is also called the southern tamandua. Below, we’ll tell you all about this anteater’s main characteristics: its habitat, diet, and reproductive habits.

Physical features and taxonomy of the collared anteater

The collared anteater (Tamandua tetradactyla) is a species of tamandua that belongs to the Myrmecophagidae family. Endemic to South America, this species is also known as the lesser anteater.

Morphologically, it is a small tamandua. Its body measures between 20 and 38 inches. Its tail makes up between 30% and 40% of its body length, because it measures from 15 to 22 inches.

Almost all of this animal’s body is covered in smooth, thick hair that lies close to its body. Its fur is notably more abundant and longer on its back, while it has softer, shorter hairs on its head and legs. On the other hand, the tip and underside of its tail are hairless.

As far as the coloration of its fur, there’s an incredible diversity of colors among specimens that live in different geographical locations. For example, in Brazil and Venezuela these animals mostly have fur of one solid color, varying between black, brown, and beige.

However, specimens from Argentina and Paraguay often have lots of spots. You can see wide spots on their bodies near the back, and several marks that extend from the base of the neck to the tail. These marks are usually black, and can be in different places.

On its front legs, it has four sharp fingernails, and there are five on its hind legs. Curiously, these fingernails are so sharp that the collared anteater has to walk on the back part of its limbs. That way, it avoids puncturing and hurting its feet.

One of the most characteristic traits of the collared anteater is its elongated, cylindrical, and curved snout, which has the approximate diameter of a pencil. Inside of it is a long, protruding tongue that is typical of all tamanduas.

Habitat and diet of the collared anteater

Usually, they prefer to live near freshwater sources, such as rivers or streams, where there are plenty of vines. These plants are an excellent food source for these anteaters. However, some species have adapted to savannas and dry forests.

As for its diet, the collared anteater is a myrmecophagous animal, which means it eats mostly ants and termites. It is very careful and selective about what it eats, because there are many species of poisonous ants in the Amazon.

In addition, it also loves honey and sometimes even eats bees. It may also supplement its diet with regional fruits.

Hunting techniques and tongue of tamanduas

The collared anteater’s hunting technique is very similar to that of all tamanduas. It makes holes in the bark of trees with its powerful claws. Then, it sticks its sharp, sticky tongue inside to capture prey in the wood.

This special tongue is another characteristic trait of tamanduas, and of the collared anteater as well. A sticky substance that acts like a kind of glue covers the entire surface of its tongue. This makes insects stick to the tongue so that they can’t escape.

Reproduction and habits of the collared anteater

Collared anteaters are solitary animals that have mostly nocturnal habits. However, they can also be active during part of the day. Males and females usually interact only during mating periods.

The reproductive phase of this anteater is usually in the fall. However, females are polyestrous.

After mating, the female has a gestation period of 120 to 150 days, and gives birth to a single baby in the spring.

The mother takes care of her baby, always carrying her on her back and feeding her until she is ready to live on her own. Their life expectancy is usually 8 to 10 years. 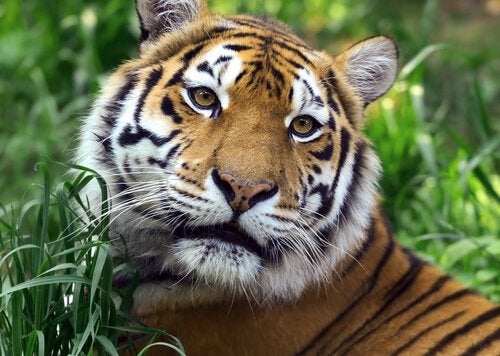 The Wild Tiger: The Comeback of the Century
In the past 30 years, the number of the worldwide wild tiger population has dropped. Fortunately, NGOS and several governments are helping them return. Read more »
Interesting Articles