What Pets Are in Fashion These Days?

There are a number of exotic species that more and more people are deciding to adopt as pets . The desire to be original or different is often a motive for getting one of these interesting creatures. 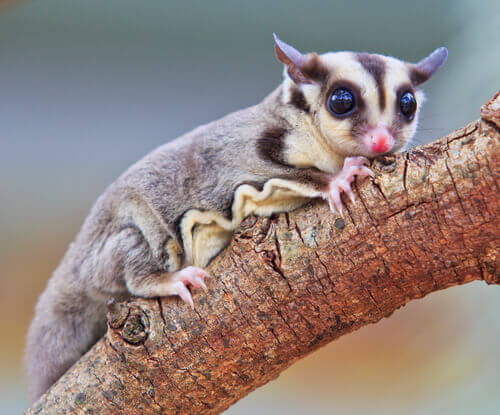 Gone are the days of asking “Are you a dog or cat person?”, as more and more different animals are being kept as pets. It started with ferrets, and moved on to more exotic species that most people would never have thought of as pets before. The truth is that having an exotic pet can make you feel special. Are you interested in knowing what pets are in fashion these days?

Cats and dogs have always been the most common pets, and most people already know a lot about their care and what they need. However, the number of people who choose other animals is growing, even if this means they have to make an extra effort to learn how to care for it. In addition, the characteristics of many of these animals make them excellent pets.

Their behavior, ability to learn, and intelligence, among other reasons, are what have brought these pets more into the mainstream. Here are some pets that are in fashion these days:

If we had to recommend one exotic pet, it would probably be the sugar glider (like the one in the photo at the top of the page). This is because they’re friendly, fun, sociable, and they love giving kisses and playing. In fact, they even bark like dogs! It’s quite a sound.

Their diet is based on fruit and vegetables, though if you give them a little bit of ham or sausage they won’t refuse it.

Ever since George Clooney showed off his latest pet, a Vietnamese Pot-bellied pig, everyone wants one. People are such copycats! The truth is that this animal, almost unknown until recently, is very docile, intelligent and trainable; they’re also quite loving and dependent.

In fact, you could say it’s almost like having a dog in the house. They’re very perceptive, so even if you don’t talk to them, they’ll know what kind of mood you’re in. They’re also quite timid; be kind when you scold them.

If you’re looking for a pet that gives you love and lets itself be loved, get yourself a Vietnamese pot-bellied pig!

Although in some countries hedgehogs are forbidden as pets, in many others it’s allowed. It’s hard to say what exactly caused the sudden increase in popularity of this tiny animal, but more and more households have them.

In spite of their size, they require a lot of care; they’re vulnerable to various ailments and illnesses, such as obesity, kidney disease, heart attacks, and even some neurological syndromes.

They can become aggressive, so if you want one, there are a number of things you need to keep in mind. For example, you should try to get a baby hedgehog so that you can train it. And remember that you’ll have to keep up with the training, until you have a loving hedgehog that won’t jab you with its spikes when it gets upset!

And one more pet that’s in fashion: the Fennec fox

These are small foxes that live in deserts and are increasingly being adopted as pets. Their character is a mixture between a dog and a cat; affectionate on the one hand, independent on the other.

They’re very sociable; actually, they usually have no problems with other pets. Maybe this is why so many people are welcoming them into their homes. Their favorite hobby is digging, so if you want a Fennec fox and you have plants at home, you’d better watch out.

So that’s our list of pets that are in fashion. Of course everything depends on your circumstances and what you’re looking for in a pet. But anyway, now that you’ve read some of our suggestions, you can go about deciding which is the ideal pet for you.

Exotic Pets – Types of Domestic Snake
With exotic pets becoming more and more popular around the world, we want to take a look at some of the different types of domestic snake. Read more »
Link copied!
Interesting Articles
Mammals
Meet The American Black Bear: Characteristics and Habitat