Found almost everywhere on the planet, these birds of prey have nocturnal habits and a particularly original song. Thanks to their stealthy flight, they catch the most elusive prey. Discover five different types of owls in the following article. 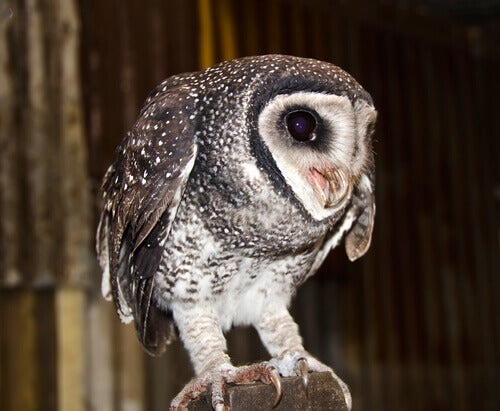 These birds of prey are known for their large eyes, heavily feathered heads, and nocturnal habits. In the following article, we want to tell you about 5 different types of owls that share certain characteristics. Keep reading to find out more.

What types of owls are there?

Owls are grouped into several families – titonidae is the most famous – and can be found almost everywhere in the world. They feed mostly on mice, although they also consume small insects, lizards, and bats. Learn about some of the most representative types of owls below:

This species can be found in southeastern Australia and New Guinea, specifically in mountainous or coastal regions and tropical rain forests. It’s nocturnal, and sleeps during the day in caves among foliage or in tree hollows.

This owl, which appears at the top of this article – is about 18 inches long and weighs some 2.5 pounds (females are slightly larger and heavier). The plumage is dark gray with mottled white, and it has a heart-shaped facial disk, dark eyes, and feathered legs.

The barn owl is one of the most widely distributed birds in the world, with the exception of Canada, Greenland, Saharan Africa, and northern and central Asia. It’s about 14 inches long, but when flying it can reach a wingspan of 3 feet.


The barn owl’s face is heart-shaped and white, as is its chest; its wings and back are different shades of brown. To hunt rodents, insects, amphibians, or reptiles, it moves its head almost imperceptibly and, when it identifies prey, it swoops towards it, with a high degree of effectiveness in catching it.

Also known as Tengmalm’s owl, it inhabits central North America and Europe, specifically the Alps, the Pyrenees, and the Balkans. It lives in coniferous forests and never leaves the breeding area. It can nest at high altitudes, in holes in trees or in abandoned nests, where it lays up to 10 eggs between February and June.


As for its characteristics, the boreal owl is small – no more than a foot tall and weighing 7 ounces. It also has a large head. Its eyes are black and yellow, and its feathers are brown and white. It’s very active at night, its flight is short and direct with rapid flapping, and it feeds on shrews, mice, and water rats.

Although it’s a nocturnal bird, it’s one of the most diurnal owls. It can be seen in northwestern North America, southern South America, Europe, northern Africa, and northern and southern Asia, mainly in open areas, marshes, and coasts. It also migrates in winter to more temperate areas.

The plumage of the short-eared owl is brown, gray, and white. Its eyes are yellow and black and the wings are furrowed with a light stripe and black tips.

It nests on the ground, grass, or marshes and lays up to eight eggs, white in color, 48 hours apart. The female incubates for a little over a month and the male stands guard, in addition to providing food (voles and rodents).

The last of the types of owls on our list inhabits Oceania, especially New Zealand. It prefers wooded habitats, dense tropical forests, grasslands, and even agricultural fields.


It’s nocturnal and hunts birds, insects, grasshoppers, moths, and wētās at dusk and dawn. It’s about one foot long, has a long tail, and its whole body is brown with lighter speckles, while the eyes are orange.
Characteristics and Behavior of the Eurasian Sparrowhawk
Today, we want to tell you about the characteristics and behavior of the Eurasian sparrowhawk, a small, endangered bird of prey. Read more »
Link copied!
Interesting Articles
Birds
Argentavis Magnificens: The Largest Bird in the World