Learn All About the Southern Lapwing

In this very interesting article, learn all about the southern lapwing, a beautiful bird. Read on! 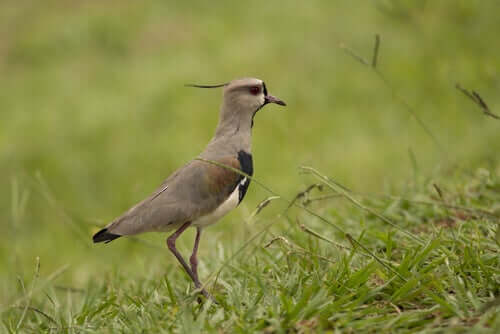 The southern lapwing, or Vanellus chilensis, is an elegant bird with thin, long legs that defends its nest and chicks. It inhabits a large part of South America. Here on My Animals, we’re going to share some facts about the southern lapwing, a small wading bird that plays an important role in controlling agricultural pests.

A bird that inhabits a large part of South America

It’s very common to see this bird and hear its distinctive call in the plains of Argentina and Uruguay. But it’s also found in areas of:

The southern lapwing is normally found in ponds, lakes, rivers, streams, or grasslands. While it’s more common in open spaces, it also inhabits urban areas. Some people even have them as pets, since it’s considered an excellent guardian that alerts of any strange movements with its calls and keeps places insect-free.

Meet the southern lapwing, a small wading bird that inhabits a large part of South America and is characterized by being a fierce defender of its nest and chicks.

Characteristics of the southern lapwing

This wading bird that looks a lot like the northern lapwing has the following physical characteristics:

More information about the southern lapwing

Its hunting techniques are fun to watch. One of them consists of running a few steps, stopping, and launching a forward peck. Another is to stir the ground with its legs, as if it were stomping, to detect potential prey beneath the earth.

This bird has sedentary habits and is usually seen in pairs or small groups. And, since it makes its nests in open spaces on the ground, it takes great care of its eggs and nestlings. Therefore, it’s always on the lookout for any strange movement.

If it believes there’s a threat, it emits its characteristic call and tries to mislead potential predators by calling, flying, or by brooding far away from its real nests. But it can also fly low to graze intruders with its spurs.

A bird that doesn’t go unnoticed

We hope you’ve learned a lot about the southern lapwing, a small wading bird that became the symbol of the Uruguay national rugby union team, besides being the country’s national bird.

It also figures in many myths and legends. Naturalist Charles Darwin also noticed this bird while traveling through South America. He stated that these birds were useful for travelers, as they call out when possible road robbers are close.

What’s It Like to Live With a Lovebird?
Would you like a unique and affectionate pet? Learn what it's like to live with a lovebird in this article, as well as some handy tips on caring for them. Read more »
Link copied!
Interesting Articles
Birds
The Violet-Backed Starling and the Secret Behind its Metallic Plumage