The Liverpool pigeon is a mysterious bird--now extinct--that's known as the spotted green pigeon. Recent studies reveal that it was a close relative of the Dodo bird. 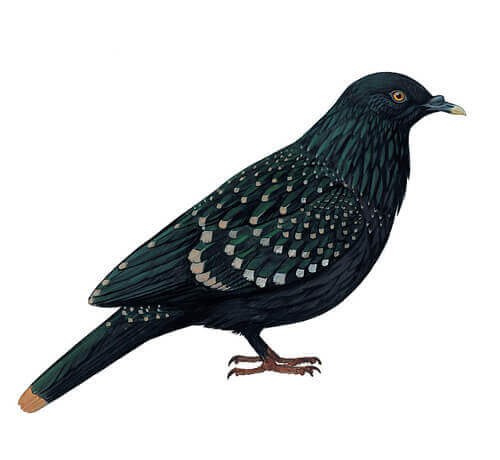 This is one of the most mysterious birds among the many that have become extinct in the past 500 years. The spotted green pigeon was first mentioned in the book A General Synopsis of Birds (1783) by naturalist John Latham. Today, the only existing specimen, preserved dead, belongs to the collection of the Liverpool World Museum (WML). This is why we commonly refer to the bird as the Liverpool pigeon.

The scientific name of the Liverpool pigeon

The Liverpool pigeon got its scientific name, Caloenas maculata, from Johann Friedrich Gmelin in 1789. It belongs to the Columbiformes order, which also includes pigeons, doves, turtle doves, and the like.

The genus Caloenas is one of the 35 genera of the subfamily Columbinae, which consists of three species:

The relationship between the Liverpool pigeon and the dodo bird

The subfamily Raphinae also belongs to the Columbidae family. The former includes two extinct bird species, which are both very famous:

Characteristics of the Liverpool pigeon

As we mentioned, there’s only one remaining (dead) specimen today. Based on this specimen, experts have attributed the following general characteristics to the species.

The plumage of the Liverpool pigeon corresponds to a semi-terrestrial island lifestyle and a low ability to fly. In fact, its short, rounded wings suggested that it evolved on a small island free of predators.

The spotted green pigeon may have reached the brink of extinction when Europeans reached is native area. Its disappearance was likely due to excessive hunting and the threat of animals that Europeans introduced in the 1820s}.

Unfortunately, experts are unaware of the origin of the specimen at the Liverpool museum. However, it was most likely a species of the Pacific, as this was the main area where collectors were active.

The specimen belonged to the collection of Mayor Davies (c. 1737–1812), an army official and topographic painter interested in birds. Though he never visited the Pacific, he was in contact with Australian collectors who may have obtained the specimen.

Therefore, experts believe that the bird originated from an island somewhere in the Southern Pacific, likely Tahiti (French Polynesian). In 2008, BirdLife International added the Liverpool pigeon to the list of extinct bird species.

The debate surrounding the Liverpool pigeon

Today, a historical debate exists around the Liverpool pigeon. Some speculate about the exact island where it lived, and others have suggested that it doesn’t represent a species itself. Rather, according to this group, the Liverpool pigeon was a young member of the Nicobar species (Caloenas nicobarica).

In an attempt to resolve the mystery of the spotted green pigeon, a group of researchers from Griffith University took DNA samples from the Liverpool specimen.

According to their findings, the Liverpool pigeon belonged to a different taxon. What’s more, the study confirmed that this animal was closely related to the Nicobar pigeon. Finally, the DNA analysis grouped this animal within the Columbidae family, which includes the Dodo bird (Raphus cucullatus), among others.

As you can see, DNA tests improve our capacity to identify new species based on historical remains. This type of study helps us better understand the extinction of local populations as well as entire species.

What Does it Mean to Be in Danger of Extinction?
Few people know that there are several categoriea that classify an animal's danger of extinction. Some animals are vulnerable, while others are critical. Read more »
Link copied!
Interesting Articles
Birds
Discover 5 Different Types of Owls