This endearing story is about the miraculous recovery of a dolphin that lost her fin and got a prosthesis. This was unprecedented because to date, no specimen of the species had survived such a loss, let alone learned to swim with a prosthesis and lead a normal life. 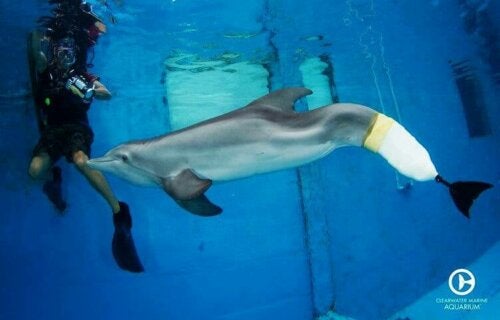 Not all animal centers exhibit animals or keep their inhabitants imprisoned. In fact, there are some recovery centers that house animals that can no longer live in the wild. One example of these animals is Winter, the dolphin that lost her fin.

Rescuing Winter, the dolphin that lost her fin

In early December 2010, specialists who work at the Clearwater Marine Center in Florida found Winter, a two-month-old baby dolphin. She was trapped in fishing nets and the ropes cut off circulation near her rear fin.

They transferred her to the center, which is also a hospital for marine animals. There, they immediately began treatment. Winter was feeling better, but her fin was deteriorating. Ultimately, there was nothing the doctors could do to save her fin.

However, Winter fought to keep going. She learned to swim differently. Despite the change in her life, she made a full recovery and grew up like a normal dolphin. Winter surpassed her caretakers’ expectations. Her will to live was strong enough to overcome all adversity.

Dolphins need their rear fins and use them to swim. No other part of their body is able to fulfill this function, and so Winter really did need her tail fin.

So, her caretakers made her a prosthesis – the first of its kind. Specialists had never seen a dolphin lose their tail fin and survive. However, a well-known human prosthetics company responded to the challenge and created a new tail fin for Winter.

Winter’s caretakers formed a team of experts from different fields. During the construction of the fin, they circumvented many problems they encountered. However, the biggest problem was placing the fin on Winter’s tail without it slipping off or damaging the skin.

Ultimately, they designed a glove-like fastening system and placed the prosthesis on Winter with a plastic harness. However, the harness is covered with a material similar to latex, which is flexible and light, but also durable. Also, most importantly, it sticks to the skin without doing any damage.

The film about Winter the dolphin

Winter, the dolphin that lost her fin, has inspired a movie that became a box office hit. The movie is called Dolphin Tale and tells the true story of Winter, with a few poetic licenses.

In the movie, Kyle, an 11-year-old boy, finds Winter stranded and injured on a beach. The film follows the story of the pair’s friendship, while the dolphin loses her fin and gets her famous prosthesis.

The film was released in 2011. It was such a success that the producers made a sequel soon after. The 2014 sequel was about Winter losing her pool companion and how the center’s team looked for another dolphin to accompany Winter.

The sequel portrays a version of real-life events. Dolphins are social animals that need to live in groups. The center found a dolphin to accompany Winter named Hope. They found Hope when she was two months old, along with her deceased mother.

The team bottle-fed Hope for a few months. However, she had come to the center so young that they couldn’t release her back into the wild. Neither was her mother there to teach her how to fish and she had no way to learn these skills. As a result, the center transferred Hope to Winter’s tank and they lived together ever since.

Winter and Hope are two animals that couldn’t have survived in the wild. In fact, there are some exceptional circumstances where humans are able to care for and rehabilitate animals that need it. These interventions actually allow these animals to have a future where they can live safely and happily.

However, Winter and Hope have given us two stories of self-improvement and friendship. Their perseverance and adaptability have made them successful. They also serve as an example to help many people not give up in the face of problems.

The Amazon Pink River Dolphin: A Fascinating Creature
The Amazon pink river dolphin is a fascinating creature that has inspired many myths, along with being one of the few kinds of dolphin that lives in rivers. Read more »
Link copied!
Interesting Articles
Fish
Different Types of Water for Your Fish Tank