Characteristics, Behavior and Habitat of the Colobus

The Colobus is a herbivorous primate that spends most of its life in the treetops. They get most of their food there and don't have to compete with other animals. 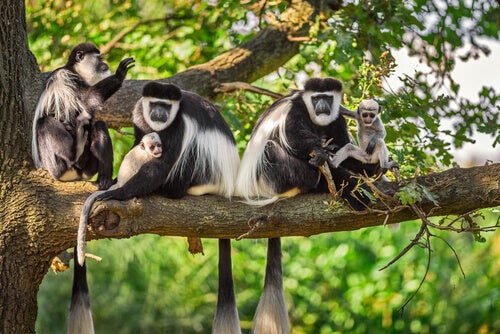 The black and white eastern colobus is a peculiar Old World primate (Colobus guereza) that lives in several African countries.

The colobus guereza is the largest of the species in this family; males weigh over 30 pounds and females only about half of that. Their coat is black but there are white spots on the tail, shoulders, and around the face.

One of the most striking things about the colobus guereza, which applies to all colobus species, is the absence of an opposable thumb. Therefore, they can neither grasp objects nor manipulate them like most primates.

The complete absence of a thumb is an adaptation to arboreal life — these primates spend most of their life in trees.

The colobus reproduces at any time of the year, although birth usually coincides with periods of abundant food. Like most primates, they only have one baby at a time and the females in the group raise them.

In general, this species reaches sexual maturity at around the age of five, at which the males leave their native group. They often live to be over 24 years old.

This animal is diurnal and rarely hangs around the ground. Also, they’re quite territorial and usually take turns guarding their own – males have harems of over a dozen individuals.

This is probably why conflicts are frequent between colobus who let out warning calls and make displays of force when they encounter another group. This territorial claim is a warning to predators who hunt tree-dwelling animals like leopards, eagles, and, surprisingly, chimpanzees.

Jane Goodall discovered that chimpanzees occasionally eat meat from animals they kill, even that from other primates such as the colobus. Remarkably, chimpanzees have been seen hunting colobus with spears, so humans aren’t the only animals who use tools.

This primate is vegetarian and leaves are the base of their diet so they’re folivorous. In fact, their stomach is divided into four chambers, like cows and other ruminants, that allow them to digest cellulose and eliminate secondary plant toxins.

As you can imagine, this primate can inhabit the high treetops without ever having to go down for food; they don’t have to compete with others to get it either. This is because the sprouts of the leaves are poisonous to many other herbivores.

This animal inhabits altitudes of up to 10000 feet but one can also spot them at sea level, mainly in dense leafy woods in Ethiopia, Nigeria, and Tanzania.

People poached them for their fur during the 20th century but they’re now a protected species. The colobus guereza isn’t as endangered but other colobus species are. The Zanzibar red colobus, for example, is threatened by habitat destruction, conflicts with farmers, and road accidents.

The Primate Species: Our Closest Relatives
The primate species is an order of mammals in which humans are included. It's also a category with a wide variety of species and sizes Read more »
Link copied!
Interesting Articles
Mammals
Characteristics and Behavior of the Capuchin Monkey

Mammals
All About Affectionate Behavior in Otters

With a primarily solitary nature, the affectionate behavior in otters centers basically on the relationship between mothers and their pups.…