The Habits of the White-Headed Marmoset

The white-headed marmoset is a unique primate in the world. Unfortunately, they're critically endangered due to the elimination of their habitat and the depletion of the population by the illegal animal trade. 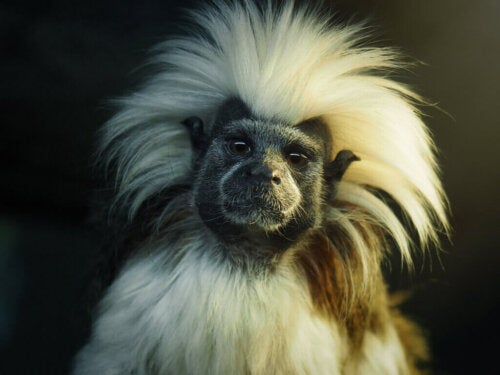 The white-headed marmoset (Saguinus oedipus) is a type of platypus primate from the family Callitrichidae. The distribution of this animal is restricted to a small jungle area delimited by the Colombian Caribbean coast.

There are many common names for this animal, and cotton-top tamarin is one of them. The names usually refer to the most distinctive characteristic of this species: the white color of their crest and mane.

How to recognize this little monkey

Size and color are the most striking parts of this primate. They’re quite small and the adult monkey weighs less than 0.5 kilograms (1 lb). In addition, there’s silver hair on the sides of their heads. Similarly, their face is devoid of hair and their skin is black.

Their back is mainly black or brown, while their arms and legs are predominantly white or yellowish. In addition, their rump and inner thighs are reddish-orange and so is the base of the tail, while the tip is blackish.

Similarly, the main characteristic that distinguishes the callitrichids from other monkeys is they have nails instead of claws. Other distinguishing features are the presence of two molars instead of three on each side of the jaw. Also, their tail is slightly longer than their body and they can’t use it to grab things.

Habitat and geographic distribution of the white-headed marmoset

The white-headed marmoset is endemic to Colombia. It mainly inhabits a relict forest of 4300 hectares destined for the protection of the dry forest. This exclusive habitat of the species is located in the municipality of San Juan Nepomuceno, near Barranquilla, capital of the Departmento del Atlantico, in the Colombian Caribbean.

This small ape is arboreal, as it inhabits the upper canopy of the tropical rainforest and the dry deciduous forest. In addition, the marmoset adapts to strips or patches of secondary or remaining forest and can live in relatively disturbed habitats.

Reproduction and life expectancy of the white-headed marmoset

This monkey has a monogamous reproduction system. In fact, it’s interesting to know they give birth to non-identical twins twice a year. Furthermore, the breeding method is cooperative, a practice that isn’t present in many other primates.

This type of breeding involves adult “helpers” who stay in the family and gain parental experience instead of reproducing themselves. This practice can result in the highest reproductive potential of all primates.

According to studies, this species has a seasonal reproduction: females get pregnant and breastfeed only from January to June. In addition, gestation lasts approximately 140 days and their life expectancy in captivity is about 25 years.

White-headed marmosets are mainly insectivorous and frugivorous. Insects represent 40% of their diet and fruit constitutes another 38%.

The marmoset lives in groups of up to 19 individuals and they follow daytime habits. Most commonly, the groups are made up of a mated dominant pair and one to seven subordinate young individuals of both sexes.

Eventually, these subordinate members form small groups and migrate in and out of the home range of the main group. The household ranges for each group vary from 17 to 25 acres.

The white-headed marmoset monkey is territorial and uses scent marks to mark its territory. However,  instead of physical contact when they come into contact with other groups, members will threaten the other group by showing their back and genital area as a territorial sample.

The current numbers of the white-headed marmoset monkey population are still unclear although estimates indicate the species is declining. What this means is more than 80% have died off in the last three generations (18 years) due to the destruction of their habitat.

Unfortunately, this habitat area is exposed to intensive colonization and forest loss. Already in 1978, estimates indicated that 75% of the original distribution of the species had been reduced due to agriculture and grazing operations. This is why we need to make some exceptional conservation efforts in order to save the species from extinction.

Titi Monkeys: Characteristics, Behavior and Habitat
Titi monkeys are an order of new world monkeys native to the Amazon basis. There are more than 40 species, the most known is the common marmoset. Read more »
Link copied!
Interesting Articles
Mammals
The Role of the Gray Squirrel in Forests