This fox species is the only one that inhabits the Iberian Peninsula. In the winter, it eats fruits, while in the summer and spring it eats rabbits. Throughout the year, like a true opportunist, this fox will eat bird eggs, insects, and even trash from garbage cans. 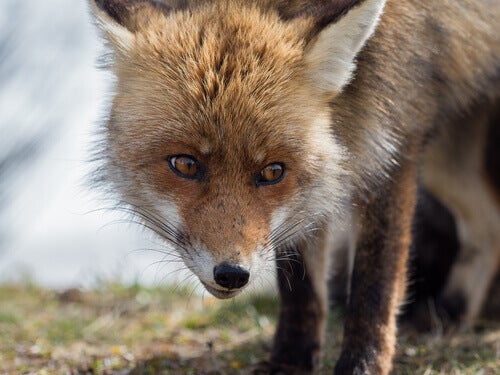 Of the 45 species of foxes on the planet, only one lives in Spain and the Iberian Peninsula: the Spanish red fox. This species is also known as the common red fox. Keep reading to find out more!

Traits of the Spanish red fox

The Spanish red fox belongs to the Canidae family along with wolves and coyotes, and the subspecies Vulpes vulpes silacea. It’s known for being one of the smallest species of foxes on the rest of the European continent.

This species looks similar to other foxes in that it has an elongated skull, pointy nose, and big, triangular ears. The Spanish red fox gets its name from its thick, red, or sometimes reddish-brown coat, though it can change to tones of gray during some parts of the year.

These foxes have five toes on their front paws and only four on the back. Like felines, fox species have sharp claws; however, they don’t retract like our feline friends’. Because of this, a fox’s pawprint can easily be mistaken for a small dog’s tracks.

To regulate its temperature, the red fox sticks out its tongue and pants, just like a dog would. On the other hand, unlike dogs, foxes don’t have the facial muscles to show their teeth.

As we mentioned before, you can find the Spanish red fox all around the Iberian Peninsula. However, there aren’t any in the Canary Islands or the Balearic Islands. The fox prefers forest cover, though it can also live in the open to find food more easily, close to humans and their garbage cans.

With respect to diet, it’s important to know that foxes are an omnivorous species. Meaning they can eat all types of food.

Something else we should keep in mind is that the Spanish red fox’s diet can and does change according to the season. For instance, in fall and winter, it’ll eat mostly fruits because there aren’t many animals in the open. However, in the spring and summer, its favorite dish is rabbit.

As far as behavior goes, the vast majority of fox species across the globe are night creatures. The Spanish red fox is no exception, and, like other foxes, begins its active hours around sundown. While foxes don’t have the greatest eyesight, it’s no matter because they use their incredible hearing and smell to get around.

Generally speaking, the fox is a solitary species, though sometimes foxes will travel in pairs or in small groups of one male and up to three females.

Foxes are known for being silent and stealthy. They can stay hidden for hours in their dens and various terrains like underbrush, caves, and rocks. As creatures of habit, they spend most of their lives in the same territory and don’t venture out very far beyond the imaginary boundaries.

The fox species can be monogamous or not and the mating season lasts from December to February. Additionally, females are in heat for about three weeks and gestation lasts for about 53 days.

Females will give birth in April or March, and each mother will birth to between three and eight pups. Fox pups open their eyes about two weeks after they’re born and leave the den after about a month.

The mother cares for the little ones exclusively. She nourishes her pups with her milk for about two months, when they leave their maternal den. Likewise, young males tend to explore the territory while the females will stay close to their birthplace.

Finally, the Spanish red fox reaches sexual maturity before they turn one year old, meaning they’ll be able to reproduce in the mating season the year after their birth.

Humans and Foxes: Are Foxes a Threat to Humans?
You may sometimes see foxes near your home. Humans and foxes have coexisted for a long time, but do foxes present a threat to humans? Read more »
Link copied!
Interesting Articles
Mammals
All About Badgers: Characteristics, Habitat and Behavior