The Grass Snake: Between Water and Land

The grass snake is a snake that, despite having a rather generic appearance, has a series of fascinating characteristics and behaviors. 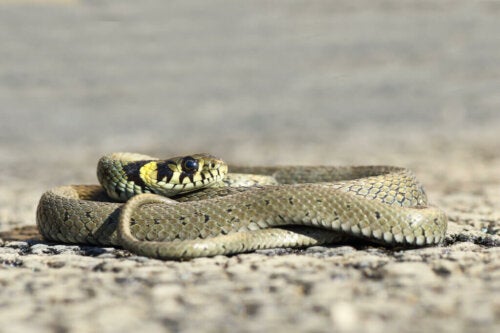 Grass snake, ring snake, and water snake are all common names for the species Natrix matrix. This friendly looking snake lives in Europe, from England to Lake Baikal in Siberia. It’s dominant in various habitats, as it has an incredible capacity for ecological adaptation on many levels.

This curious reptile is found in the Iberian Peninsula, France, Italy, and many other European countries. Therefore, it’s a typical species of this continent. Despite its cohabitation with humans since times long forgotten, many people don’t know this snake, and may even see it and fear for their lives.

There’s no need to fear, however, because we’re looking at a totally inoffensive animal, which, at most, may poop on anyone brave enough to grab one. If you want to know more about this widespread snake, we encourage you to read on.

How to distinguish this species?

It’s possible that some of the readers living in Europe have come across one of these specimens on a walk in the wild. After all, official scientific sources estimate that in Germany there’s a high population density of 3.6 animals per hectare. In other words, approximately 2.5 square acres. Here we’ll show you how to identify the grass snake:

Just the same, this last characteristic pertains to young snakes since it tends to disappear when the snake becomes an adult.

Easy to distinguish, right? The less-trained eyes can confuse this reptile with a species closely related to it, the Natrix maura. Its greatest differential feature is its size, since this second species never exceeds 30 inches in length.

What are its habitats?

The previously cited sources report that the grass snake feeds mostly on adult amphibians (making up 60% or more of its diet), as well as fish, tadpoles, worms, and other small vertebrates. This trophic specialization is due to its aquatic habits since it loves to slither through waters of springs, wells, lakes, and man-made cisterns.

Grass snakes have an excellent swimming ability, which makes them a nightmare for most anuran amphibians that come to the springs to cool off or reproduce.

Such is the level of competition and predation, that some species of toads like the Epidalea calamita have learned to identify chemical signals from these snakes. Thus, they avoid shelters impregnated by their smell that would undoubtedly end in their death.

Like many other reptile species, the grass snake hibernates during the winter, since the cold environment of European forests in months like January has little to offer. These snakes come out of their dens with rising spring temperatures and reproduce from April to May. By July, their litters of eggs are ready, which hatch in about 10 weeks.

The grass snake lacks venom, so it has to manage to evade various predators. Adults initially try to flee, but if cornered, may display a range of spectacular behaviors. These are two of them:

The grass snake: Inoffensive and fascinating

As we have seen, even the most apparently common animals have fascinating characteristics if we stop to observe them. Who would have thought that a grass snake, so common in yards and fountains, would show such complex behavior patterns? This is nature, which provides tools to maximize the survival of all species in their natural environments.