A Pit Bull and its Chicks: An Unlikely Friendship

Pit bulls have long been branded "dangerous dogs", but this story of unlikely friendship might just be enough to change some people's minds. 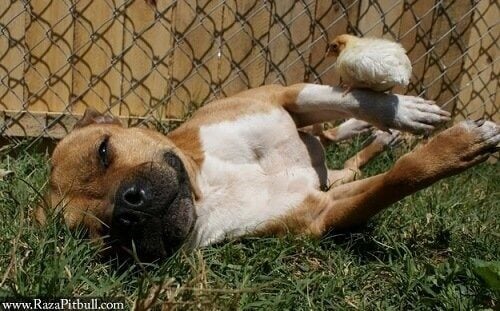 It’s very easy to label someone, or something. And this is exactly what happens with pit bulls. They have long been branded “dangerous dogs” in many countries around the world. But today’s story might just be enough to change some people’s minds. In this article, we’ll tell you all about the unlikely friendship between a pit bull and some chicks.

The pit bull’s status as a dangerous dog actually has very little to do with the dogs themselves, and much more to do with what people have done with them. Their great strength and imposing presence have led to them being used in dog fights, or trained as guard dogs to kill intruders.

But there’s no such thing as a dangerous dog. A dog is only what you train it to be. And there is no greater proof of this than the following story.

The dog’s owner told us:

“I live in Texas, where it’s normal to have a big house full of lots of different animals. Almost everyone has at least one dog to keep them company and guard the farm, and some chickens to give them fresh eggs.

I’m no exception. I have some chickens and a pit bull. He’s black and white, and one of the sweetest dogs I’ve ever met in my life. I can see the looks of terror on people’s faces whenever I take him for a walk. It doesn’t matter where you go, people think of these dogs as dangerous.

I don’t blame them. In fact, it’s good to be cautious around dogs you don’t know. But you can’t simply tar an entire breed with one brush. You have to get to know them individually. And what happened on my farm a few weeks ago will tell you everything you need to know about my dog’s character.

I’ve shared it on social media, so if you’re one of my neighbors or you live nearby, and we pass each other as I take him out for a walk, you might decide to come and say hi, rather than walking in the opposite direction.

One of my chickens laid some eggs which hatched. People normally keep their dogs away from them, but I decided not to. I know my dog, and I knew he wouldn’t hurt a fly. One day, I suddenly noticed that he was sniffing the chicken feed. At first I wasn’t sure what to think.

I watched him for a while, then decided to take a video. I noticed that the chicks weren’t in the least bit afraid of him, and just carried on eating while he was snuffling around them. At first, I thought he just wanted to have a look, and then he would leave. But he stayed, and then lay down next to them. They went right up to him, without a care in the world.

Since that day, the chicks have followed him around the farm. Maybe they feel safe with him around. Maybe they see him as their own personal bodyguard. Whatever the reason, they have formed an unbreakable bond, one that goes deeper outward appearances.”

An incredible story of animal friendship

It’s unfair to label all breeds used for fighting as dangerous. Unfair for them, and for their owners. A dog will be what we want it to be. It will learn what we teach it, and will behave as we teach it to behave.

This story of a very unlikely friendship shows that every animal is unique. Animals don’t understand prejudice. It doesn’t matter what you look like on the outside; to them, it really is what’s inside that counts. Those chicks could sense what lay in the heart of that adorable pit bull, and trusted him instinctively.

Pit Bulls Were Once Known as “Nanny Dogs”
Even though the Pit Bull is now commonly considered a potentially dangerous breed, this has not always been the case. There was a time when Pit Bulls were used as canine babysitters or nanny dogs. Continue reading to find out why mankind's perception of this breed has gone from one end of the spectrum to the other. Read more »
Link copied!
Interesting Articles
Dogs
The Tosa Inu: A Perfect Mix of Europe and Asia

Interesting Articles
Professional Training
How To Train a Falcon