This type of Braque is considered one of the most ancient pointers of the pointing breeds developed in France. The breed was described in French literature as early as the late 1500’s. 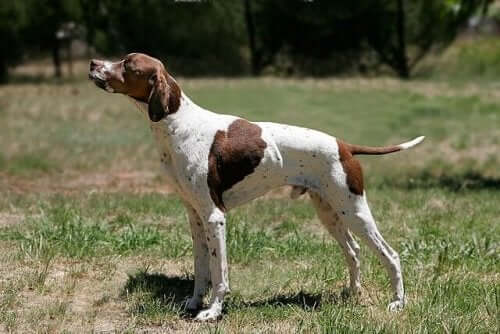 The Braque du Bourbonnais is yet another species of Braque that we want to share with you. We consider its traits to be very special and it also has a calm character. Stay with us and we’ll teach you more about this beautiful dog breed.

This Braque is a gundog breed of French origin and was, like other Braques, used as a working or hunting dog. Let’s take a look at its history.

Origin and history of the Braque du Bourbonnais

Historian experts believe, as with the case of other Braque dogs, that it descends from the French pointer breeds and came into being in the sixteenth century. These facts are narrated in the Natural History of Aldovrandi compendium found in the National Library of France. Since then, this breed has lived in the Ariège Pyrenees, a department in southwestern France.

The Bourbonnais comes specifically from the crosses that were made between local dogs and Braque Francais. These crossings continued until the breeds were differentiated and hybridizations were banned.

As with the other Braque breeds, this one also nearly became extinct after the two world wars. However, by the 1970s, some breeders wanted to include specimens that weren’t Braques and mix them together.

Nevertheless, some hunters and breeders managed to keep this breed from becoming extinct. They started crossing them only with the few remaining specimens of Bourbonnais in the world. Moreover, even though only about 100 puppies are born a year, it seems to be enough to preserve the continuity of this beautiful animal.

This animal is a medium-to-large size and very similar in appearance to other Braques. It’s powerful and vigorous, but lightweight and very resistant altogether. Despite its tough appearance, it moves very elegantly and this is also accentuated by the beauty of its coat. In addition, its body has very elegant proportions and is pleasing to the eye.

We should also note that something that sets it apart from the other Braques is the size of its legs. In this case, they are shorter in comparison, yet straight and sturdy.

Its head is long and rounded in every direction. It has a straight snout and a chocolate-colored truffle with wide-open nostrils, while its long, thin ears fall on both sides of the head. Until recently, owners would cut their tails (which is now forbidden). As a result, we can see that its tail is naturally wide at the base and semi-long.

As for its coat, it’s short and thick, yet tight, soft, and shiny. There are two most commonly accepted colors for this species. One is liver, also called « wine dregs » or « faded lilac » and fawn, also called « peach blossom ».
Big spots are tolerated on the body if they’re not bigger than the palm of a hand. On the head, the two eyes mustn’t be inside those spots.

Although hunters mainly used it as a pointer and tracking dog, this animal is very multifaceted and adaptable. This means that it can perform other tasks without any trouble. People haven’t commonly had it as a pet, but its calm character makes it more than suitable for this.

The Bourbonnais has a good temper. In addition, this Braque has great balance, is friendly, affectionate, docile, and very good with children and other pets. Its natural pace is a gallop, but it can also use trot.

In short, it is a very active dog that doesn’t like being bored – if it does then it will become destructive and bark too much. It’s a very loving dog with its family, likes being stroked, and enjoys games. All of this makes the Bourbonnais an ideal pet for homes with children.

Similar to other Braques, this type doesn’t require any special care, as there are no major health issues related to the breed. However, just to be on the safe side, exercise should always be an important part of its routine.

In fact, not having enough physical exercise can lead to stress, anxiety, and other problems. This could, in turn, sour the animal’s character and spoil the relationship with its owners.

In the same way, it’s also important to check its ears often. The shape they have makes it easy for bacteria and ticks to enter and remain. As for its coat, a weekly brush to remove dead hair and other remains will usually be more than enough.

Did you enjoy learning more about the Braque du Bourbonnais? We hope to catch you in another interesting article about other amazing animals. Until next time!

All About the Auvergne Pointer Dog Breed
The Auvergne pointer makes for skilled hunting dog as well as a caring and affectionate pet. Find out more about this breed in today's article. Read more »
Link copied!
Interesting Articles
Dogs
The Causes of Epilepsy in Beagles