Home » Breeds » Dogs » Canine Psychology: Everything You Need to Know

Canine Psychology: Everything You Need to Know

Thanks to canine psychology, you can better understand your dog's behavior. This will make training them easier and it will be good for the pet because they'll be more balanced 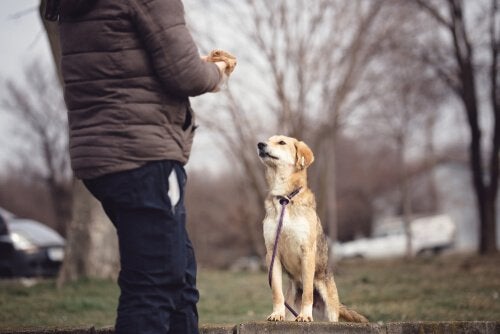 It doesn’t mean that you have to take your dog to therapy or anything like that. You’ll just be able to understand how your pet thinks. Canine psychology is very helpful when it comes to training or educating dogs. Learn more about by reading this article.

First, you have to remember that dogs are descendants of wolves. So, they like to live in packs with a certain hierarchy. Therefore, the owner should be the alpha male or beta female and the animal should be ranked below them and obey everything they command.

When that doesn’t happen, meaning the dog exceeds the limits, their behavior becomes unbalanced. That’s when a lot of behavioral problems or even aggression may appear.

If you consider giving dog psychology a try, then you’ll understand why it’s necessary to lay down certain guidelines that your pet can’t change or alter. To achieve this goal, it’s very important not to reply based on human thought or psychology. So, it’s not a good idea to treat your pet as if he were a child or a baby.

You have to start using canine psychology when your dog is a puppy, or once they’re introduced to your home. In both cases, they’ll seek protection from their owner, as if their owner were their parent or pack leader.

This is a crucial stage in the animal’s life. If they’re not taught based on having an alpha male or a beta female, then they’ll be more likely to develop behavioral problems in the future.

You’ll have to balance affection with discipline so that they’ll correctly follow your instructions. So, don’t worry if they don’t obey you 100% of the time. However, you should seek professional help if they pay attention to you. It’s likely that you’re the one failing as “coach” because you don’t understand their needs or the psychology of the animal.

If a dog is educated according to proper guidelines, then they’ll likely behave well throughout their life. However, you should know that it’s never too late to “turn” them into an animal that recognizes your authority. To ensure that the coexistence with your pet is perfect, you can take a look at some tips:

1. Don’t let them be dominate

When the puppy first comes home and is playing, he’ll probably want to jump on you. Don’t let that happen because that will be a sign of your domination. If he they to, then take them off, put him on the floor and place him on his back. This will get them to understand “who’s boss.”

2. He can only play with his toys

Dogs may take objects from their owners when they’re bored or as a “prank.” However, that’s another attempt to show dominance. So, be sure not to let that happen. Offer them their own toys whenever and punish them when they use something that doesn’t belong to them.

3. Give them treats and pet them when they deserve it

You shouldn’t be cold-hearted on your dog. You should show them affection, but don’t overdo it with pets, kisses and treats. He should understand that rewards have to be earned. So, when they respond correctly to an order, then you can give them a treat.

Another factor of canine psychology states that a sociable dog is a healthy dog. Being in contact with other animals — at home or outside — is good for their emotional health. Dogs need company. You should keep in mind that a lack of socialization is one of the reasons for disobedience and behavior disorders.

Dog psychology recommends spending quality time with your pets. So, spend a few minutes a day playing with your dog, feeding them accordingly and continue making the bond between both of you stronger and stronger. That way, your pet will behave excellently.