In this article, we'll tell you the origin and characteristics of Hierran Wolfdogs. Keep reading to learn all about them. 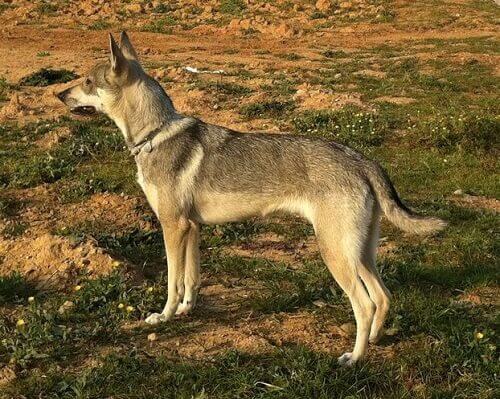 Hierran wolfdogs are herding dogs for cattle. In addition, the Royal Canine Society of Spain (RCSC) recognizes them as a breed. With a primitive and wolfish appearance and a slender frame, this beautiful animal is faithful to its owners, yet suspicious of strangers.

Raised by the shepherds of the island El Hierro (Canary Islands), it’s hard to know where they came from. In fact, it’s hard to know where many rural ancient dogs come from. However, some think they arrived with the conquerors of these islands in the 15th century. On the other hand, some researchers state that similar dogs lived in the area before the Europeans arrived.

What we do know is that these beautiful pups have been accompanying shepherds of El Hierro for at least 200 years. In addition, some species are also found in Tenerife, Gran Canaria and La Palma.

However, due to a decline in traditional livestock activity, Hierran Wolfdogs are on the verge of extinction. Nowadays, there are only a few dozen animals in this breed.

Although most people have never heard of them, people that live on the Canary Islands are starting to have Hierran wolfdogs as pets.

Hierran Wolfdogs are a breed raised by the shepherds of El Hierro, an island on the Canary archipelago.

Muscular and proportional, but with a thin and light skeleton, Hierran Wolfdogs have these characteristics, according to the Royal Canine Society of Spain:

Like a good shepherd dog, Hierran Woldogs are loyal and affectionate to their owners. In addition, without being aggressive, they’re suspicious of strangers. We should also mention that some males can be territorial, especially with other male dogs.

Calm, docile and balanced, they stand out for their intelligence and personality. They also learn very quickly. If you socialize them correctly, they won’t have major problems.

Like all herding dogs, they have lots of energy and love to play and run. Therefore, if you live in an apartment, make sure you take long walks and get lots of physical activity. That way, you can avoid bad behavior.

Hierran Wolfdogs are ideal dogs. For example, they have great agility due to their speed and dexterity. So, if you don’t like sports, we don’t recommend getting a pet with these needs.

Hierran Wolfdogs are rustic and healthy animals that don’t usually have major health problems. Their life expectancy ranges from 12 to 14 years. In addition, they need daily exercise, good nutrition, and regular veterinary care to grow up healthy and happy.

We recommend brushing them regularly, especially during shedding seasons (spring and fall). Giving them a bath once a month is ideal.

Dogs and Wolves: Differences and Similarities
In spite of their similarities and the fact that both dogs and wolves are members of the same genus, Canis, they are in fact two separate species. Read more »
Link copied!
Interesting Articles
Dogs
Bulldog Breeds: History and Traits