This dog breed is suited for small as well as large hunting grounds. The name has nothing to do with its temperament, but refers to its ability to point out birds. 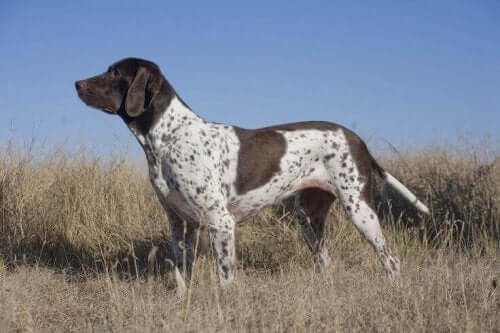 The Old Danish Pointer dog is also known as “Gammel Dansk Honsehund” which, translated literally, means bird-hunting dog. Originating from Denmark, this animal is a medium-sized pointer breed. Would you like to know more about this interesting dog breed? Well, keep reading and find out!

This breed’s history began in 1710 when Morten Bak, a man who lived in Glostrup, Denmark, began crossing mutts with farm dogs with black spots for 8 years. From these crosses, white-backed dogs with brown spots began to emerge and people called them Old Danish Bird Dogs. They would later be known by the name they have today.

During World War II, the breed was on the brink of extinction, although there were those who were committed to preserving them. To this day, it’s a highly recognized and valued breed in Denmark’s field trials. It’s strange to see them outside this environment, although they have spread across other countries, especially in Europe.

Characteristics of the Old Danish

The Old Danish Pointer is a large dog that can be between 20 and 24 inches tall in the case of males, and between 18 and 22 inches for females. Males can weigh between 66 and 77 lbs and females around 57 and 68 lbs. The difference between males and females in this breed is very noticeable. The females are small, lighter, and more energetic.

As for their life expectancy, they usually live between 11 and 13 years and don’t usually have any serious health problems, except for some specimens that have suffered from hip dysplasia. Working with a responsible breed, and purchasing a pup from health tested parents help minimize all these risks.

It has a strong constitution, and is very robust and powerful in appearance. Its rectangular-shaped body is long and well developed, with a broad and straight spine. The head, on the other hand, is large and short and includes long, drooping ears.

The coat is short and thick, although not soft to the touch. They have tight skin that really defines the body structure. In addition, experts accept white with brown colors, either large or speck-shaped for this breed.

This breed is very quiet and lives under the radar they are fast and athletic, and seem to have an elegance when they move.

This dog has always been a multifaceted one, effective for different tasks such as small game hunting, wild boar hunting, birds picking, or even blood tracking. This is why it’s still a very intelligent and active dog, which needs large doses of exercise. Therefore, it’s more suitable for living in rural areas rather than in small apartments.

At home, they’re very obedient to the whole family, docile, tolerant, and easy to train. They’re ideal for being with children and can live perfectly with other pets without any problems. However, if it lacks exercise, it can turn destructive or even bark more than it should.

Regarding its temperament, these are loving and attentive animals. They love to mingle and are very loyal, always willing to defend their loved ones regardless of the danger before them.

As we said earlier, exercise should be a vital part of their routine. This way you’ll not only maintain their energy levels at bay but their limbs will also become stronger and the dog will be healthy. They thrive with an active owner and need even more exercise if they aren’t hunting. Therefore, they need a big yard they can run and play in.

You’ll need to brush their coat at least once a week to remove any dead hair and give way to new ones. However, their ears do require a little more attention. Due to their shape, they can accumulate fungi, bacteria, and ticks that could cause diseases. Ticks have a tendency to take root on their legs, so a thorough examination along with the ears will also be necessary.

As you can see, the Old Danish Pointer dog isn’t a complicated animal to care for or live with.  If you’re thinking of having one as a pet this will be an ideal choice! Just think about what you can offer them and whether it will be the most beneficial thing for everyone. Our love for animals and our desire for them to be well must always be paramount.

Pyrenean Type French Pointers
French pointers are a hunting breed from France. In fact, they have been around since 1700. Keep reading to find out more about these dogs. Read more »
Link copied!
Interesting Articles
Dogs
Gordon Setter: The Most Beautiful Pointing Dog