Pancho: Most Famous Dog on Spanish TV, Dies at Age 16

The true story of this long life deserves an honorable mention 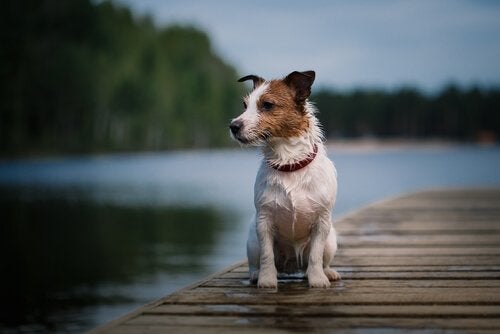 Perhaps those who do not live in Spain and have never lived there do not know about Pancho, a Jack Russell terrier well-known to Spaniards since his childhood. Pancho was an actor and the protagonist in many ads and television commercials.

In this article we want to pay homage to this loving and funny animal. Unfortunately, we have bad news to tell you: Pancho, the dog, has died at 16 years of age. Today we’re going to tell you more about him and his television career.

Meet Pancho, the dog that lit up the TV screen

His real name was not Pancho, but Cook. But hey, Spaniards like to keep to tradition, so they wouldn’t have remembered a name like Cook. For that reason, he will always be Pancho the dog.
Pancho rose to fame because of  a famous National Lottery commercial in which he stole the lottery ticket from his owner and became a millionaire. In addition, we could see how he used the money: he traveled the world. We could see the dog with a hat lying on a hammock in the Maldives or with a fur cap in Moscow.
The truth is that the ad was fun, and Pancho looked very funny in his different clothes. People even made bets on what the animal’s next destination would be.
That was how he became famous. Soon television networks began to consider the animal for different roles, but now Pancho called the shots. He chose, according to his preferences, the roles he liked best.
The first project he accepted was the film “Pancho, The Millionaire Dog”, which was geared toward children. It followed the same story line of the commercial that made Pancho famous. The film was a success with both children and adults.
Later he acted in a famous series called “Aquí no hay quien viva” (No One Lives Here)”, starring as the dog of a romantic and virgin elderly lady who still sought the love of her life. According to her, that love was her sister’s husband, whom her sister stole from her.
Pancho was always in the middle of her fights and was even used by the neighbors to blackmail his owner. They even kidnapped him and demanded ransom for him. It was a very funny series, and  the dog made it even more enjoyable.
On May 19, 2016, at 16 years of age, this beautiful Jack Russell died of natural causes, leaving a void in the hearts of Spaniards.
However, they will all remember Pancho, because he was a part of their lives, their childhoods and our memories.

There have been many dogs that have been part of our lives through the screens, not only in Spain, but internationally. We want to remember a few:
Many dogs that have appeared on screen to brighten our lives and fill our minds with memories. We’ll never forget them, and so today we wanted to pay them homage.
Link copied!
Interesting Articles
Dogs
The Causes of Epilepsy in Beagles