Police Are Looking For The People Who Dyed A Dog Pink 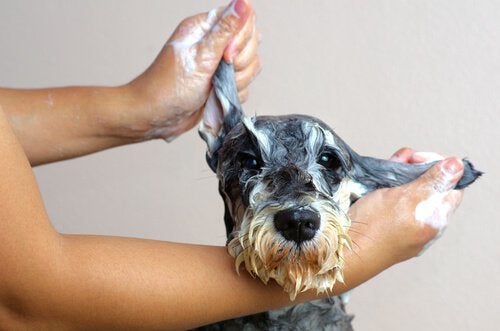 In the Russian city of Izhevsk, the police found a stray dog that was dyed pink. This action caused serious health problems for the animal. The act was reported by the neighbors and the police are looking for the people who are responsible for committing this crime. Who on earth could be capable of dying a dog’s hair?

The authorities of this Russian city are continuing to look for the people responsible for turning a stray dog pink. The images of the poor dyed animal went viral on social networks. The vast majority of users were completely outraged and claimed that it was one of the cruelest jokes they had seen on the internet.

According to several international media sources, the local wildlife activist and volunteer, Vera Ivanova, found the animal. She took him to a nearby shelter where he received the attention and care necessary to remove the dye.

The woman said that, fortunately, the puppy was “miraculously” saved.  She added that although he is now in good health, he had vomited a lot, presumably after ingesting some of the dye.

The local police are still looking for the people who are responsible for dying this animal, to capture and accuse them of animal cruelty.

In the city of Medellin, it was a complete outrage for many people after seeing a photograph of a dog dyed with the colors of the national flag: blue, yellow and red. This occurred while the national soccer team was playing in the Copa América.

Someone dyed this mixed breed dog’s head, torso and front legs yellow. His belly and back were dyed blue and his tail and hind legs were dyed red. He looked very frightened in images.

A Colombian veterinarian named Catalina Yepes Mejía, who belongs to Corporación Raya (dedicated to the preservation and respect of animals), stated that, although there are non-toxic dyes specially manufactured for animals, she doesn’t believe they were used in this case.

They are very difficult to obtain in the local market. “Apart from all physical damaged that took place on this dog, this dogs life is at stake,” the veterinarian said.

The dangers of dying a dog

Although these acts can make us feel completely outraged, some people make “profits” off of dying pets. This “fashion” take place in cities like Tokyo, New York, London and Paris. If people don’t use specially manufactured dyes on pets, then these harmful products can really harm the animal.

Even in China, many dog ​​and cat owners dye their pets to make them look more attractive. One well-known example is a family that dyed their dog to look like a panda (black and white). There are also merchants who dye them to have them pass as another breed in order to sell them at higher prices.

In most cases, dyes are poisonous to animals. Remember, the skin is one of the most sensitive organs of the body due to its absorbing properties. The color or dye penetrates the dermis and goes into the animal’s body. The process takes place even faster if the dog or cat licks the dye.

There are several cases of dogs that have died due to being poisoned by the chemicals in dye. Not bathing the animal to remove the product is even worse.

Besides that, putting this type of product on a dog covers his natural scent. This can be uncomfortable for him because his sent is what identifies him and has him relate with other animals. This also happens when you spray perfume or bathe your dog with shampoo made for people.

Source of the image: entremujeres.clarin.com