Are Snub-Nosed Dogs More Affectionate than Other Dogs?

Studies have found that snub-nosed dogs were more affectionate than longer-nosed dogs, but that they were more aggressive to strangers.

Snub-nosed dogs tend to naturally make us love them. It seems to be their lovely little snout that adds to their cuteness. Like the French bulldog or the Pekingese and some others, these dogs make us sigh when we see their beauty. In addition, they’re always running towards us and making us laugh. That’s why people say snub-nosed dogs are more loving. Do you think this is true?

There are many countries where having a flat-nosed dog has become fashionable for no apparent reason. Because of this, experts carried out a study with the intention of finding out what this obsession was due to.

A study that reveals snub-nosed dogs are more affectionate

Snub-nosed dogs usually suffer from more diseases and illnesses than the rest of our furry friends. In addition, they generally die younger than the rest, so there were no advantages when it came to desiring one.

They also often have severe breathing problems that can sometimes lead to surgery. However, the specialist who published his research in Plos One says that those who adopt one of these dogs are compensated by their calm and loving behavior. Is it true that love overcomes all faults? Let’s find out.

McGreevy did some research with 60,000 dogs of 45 different breeds to analyze the relationship that might exist between their physical characteristics and their behavior. They found that the size of the skull greatly influences their behavior. Snub-nosed dogs were more affectionate and obedient than those with larger faces and longer snouts.

The experts came to this conclusion because these doggies were more likely to go after a toy when thrown at them. They were also less afraid of chasing strangers out. As a result, specialists claim these dogs are capable of doing anything in order to protect their owners.

Another feature that seems to be very appealing to people who choose this type of dog is their gaze. Their bulging eyes help them to keep their gaze fixed. This fact creates a special bond between them and their owners. In addition, this also helps them to see the things their owners are pointing out to them more easily. This is why they are often more obedient and agile.

Are there really dogs that are more loving than others?

According to Sergio Gomez, a veterinarian specialized in animal behavior, there are no dogs that are more loving than others. He explains that it’s the sensations that dogs make us feel that causes us to define them as more or less affectionate.

For anyone who has a dog, their pet is the most beautiful in the world and, of course, the most loving one. Therefore, to claim that there are more affectionate dogs than others is to generalize too much.

It certainly isn’t our intention to say that dogs with long snouts aren’t affectionate! Here at My Animals, we love to keep you informed with all the latest research that are made about our dear furry friends.

Sergio Gomez says flat-nosed dogs have different conducts from other dogs that can make us think they’re more loving.

When it comes to playtime, snub-nosed dogs are more likely to lick than to bite, for instance. This makes them seem more loving than those who try to bite when we play with them. Even if it’s just playing, sometimes they can hurt us without meaning to.

On the other hand, a flat-nosed dog’s face can provoke more tenderness than that of a dog with a long snout, and that may encourage us to give them more cuddles. As a result, they return the affection and therefore may seem more loving than other dogs.

To sum it up, we can’t simply generalize about which dogs are more loving than others. Although it’s possible that some studies have shown that flat-nosed dogs are more affectionate, we’re sure that the most affectionate and beautiful dog in the world is your dog! 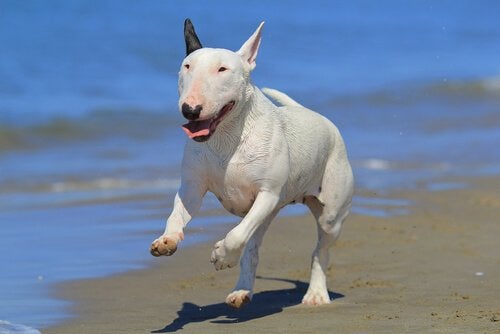 Bull Terrier: Do You Really Know Everything About This Breed?
The English Bull Terrier is a dog breed known for their particular head shape and small triangular ears. There are two kinds, the Bull Terrier and the Miniature Bull Terrier. Read more »
Interesting Articles