The Drever or the Dachsbracke Dog Breed

The Drever, also known as the Dachsbracke, is a relatively new canine breed the comes from Sweden. Find out more in today's article. 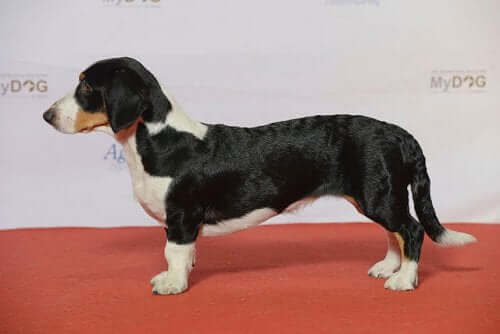 The Drever, also know as the Dachsbracke, is the smallest dog among canines of Swedish origin. Specifically, it’s a hound or tracking dog of small stature.

The origin of the Drever

According to the International Cynological Federation, the Drever belongs to group 6. It’s a tracking dog, or hound, and comes originally from Sweden. The origin of this breed is relatively recent. In fact, until half a century ago, it still wasn’t recognized as a breed.

At the beginning of the 20th century, the Swedes imported a breed of dogs called the Westphalian Dachsbrache from Germany. The mixing of this animal with other groups of tracking dogs gave birth to the Drever as we now know it.

The first references to this race date back 30 to 40 years ago. However, it wasn’t until 1953 that the Drever received official recognition as a Swedish breed.

According to the International Cynological Federation, the appearance of the Drever must be strong and robust, agile, but with well-developed muscles.

The head of this breed is quite large in comparison to its body, which should be elongated, with short legs. The animal’s muzzle will always be the same length as the skull. This a crucial detail when it comes to the animal’s olfactory and tracking abilities.

As for the animal’s coat, its fur is rough, straight, and lays flat against the body. As for coloring, spots of any color are permissible. However, Drevers should not be all white nor liver-colored.

The character and temperament of the Drever

The nature of the Drever is similar to that of other hounds. It’s astute and very intelligent given its great cranial capacity and the proportion of its cranium to the rest of its body.

What’s more, a healthy Drever that’s well cared for will never become aggressive, fearful, nervous, or scared. Drevers get along just fine with other dogs and are ideal for family life and living with children.

Care and other recommendations

The Drever or Dachsbracke is quite a robust breed that isn’t particularly prone to any illnesses. However, you can prevent any problems by taking your dog to the veterinarian regularly. And, of course, by practicing habitual physical exercise.

After taking your dog out to the country, you should always inspect its feet and ears. These areas are the most susceptible to thorns, burs, ticks and other elements that can be harmful to our pets.

As this is a breed with short, rough hair, brushing your dog once a week is enough to avoid small knots in their elbows and eliminate loose hairs.

All About the Auvergne Pointer Dog Breed
The Auvergne pointer makes for skilled hunting dog as well as a caring and affectionate pet. Find out more about this breed in today's article. Read more »
Link copied!
Interesting Articles
Dogs
Bulldog Breeds: History and Traits