They may look more like a greyhound, but the Magyar Agar has its own history and is also the fastest hound in the world. 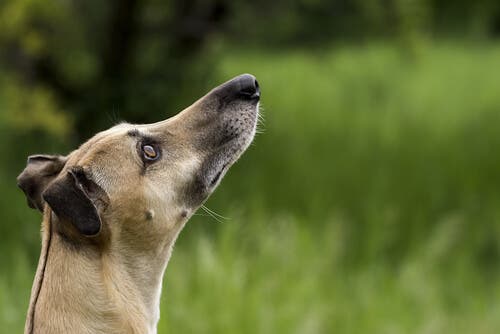 They may look like a greyhound, and while they’re related to the greyhound and the Spanish greyhound, the Magyar Agar is a breed in its own right.

Hounds and greyhound breeds date back to Ancient Egypt and they haven’t evolved much since then. The Magyar Agar is particularly known to have reached eastern Europe around the 10th century, with the physical characteristics and behavior that we associate with them now.

Hungarians, great hunters, took them with them and introduced them to their territory after they conquered Pannonia. We assume that this breed of dog accompanied them when they left the center of Asia.

The Magyar Agar is believed to have stayed in that area of Europe for centuries without undergoing major changes. They continued using them as hunting dogs, especially hunting rabbits and foxes, and were later introduced to race tracks and dog sports.

In the 19th century, they were crossbred with the English greyhound and thus managed to gain in speed, but their appearance didn’t change. Today they’re a common breed among Romanians and Hungarians but are very little known outside these countries. They’re still hunting and racing dogs.

Characteristics of the Magyar Agar

As its name implies, the Magyar Agar is classified by the FCI within group 10. It’s a short-haired hound that is light, fast, and agile.

Of all the races it’s related to, it’s one of the biggest. They can reach 27.5 inches tall and can weigh between 44 and 66 pounds.  They’re tall, strong, but slim. Any other breed with a similar height would weigh two to three times more.

The Magyar Agar has similar physical characteristics to greyhounds. They have elongated, triangular heads, small dark eyes, and long muscular necks. They have long thin legs, slim bodies, firm skin, and very deep chests that contrast with their narrow waists.

However, they have a couple of characteristics that other similar breeds don’t have. Their ears fall forward when alert, and in winter their fur is different. Despite being a short-haired dog, in winter their fur grows to protect them from the cold.

Behavior of the Magyar Agar

The Magyar Agar shares the same character as their relatives. They’re loving, courageous and hard-working. They’re loyal to their family, yet cautious around strangers, however, they aren’t classed as guard dogs. They’re intelligent and easily pleased, and don’t exaggerate their love and appreciation.

In contrast, they’re energetic but at the same time, calm. They need a lot of exercise and, although they love the vast space of the countryside, they can get used to living in the city if they get plenty of daily outdoor exercise. However, inside the home, they’re a comfortable and lazy dog.

While hunting and racing, they’re fast, determined, and obedient dogs. They’re an intelligent, easy-to-train breed that enjoys working in their natural habitat. They use vision, rather than smell, to hunt prey, and this is why they find games such as fetch too stressful.

Caring for the Magyar Agar

Magyar Agars are lucky to not have any hereditary diseases from their breed. However, they can be afflicted by diseases typical of big dogs, such as stomach twisting and elbow or hip dysplasia, which are the most common health problems.

Despite this, they still need to attend routine vet visits and should regularly receive vaccinations and deworming. Having no hereditary diseases doesn’t make them immune to many other health problems, though, and these must be prevented and controlled.

Like any other dog walking around the field, they should be checked regularly for splinters or thorns, for example, especially around the legs and ears. Care should also be taken with ticks and fleas.

The Magyar Agar may look like a greyhound but has several outstanding qualities that make them different from other hounds. In short, they’re dogs with a long history and a character of their own.

The Saluki: The Royal Dog of Egypt
In this article, we're going to tell you all about the Saluki, or the royal dog of Egypt. Read on to learn about one of the oldest breeds in the world! Read more »
Link copied!
Interesting Articles
Dogs
Pug Dog Breed, the Best Dog for You