This breed is the result of a cross between Hungarian herding dogs and other sheepdogs. They're intelligent, agile, strong, willing to work and make a great family pet or guard dog. 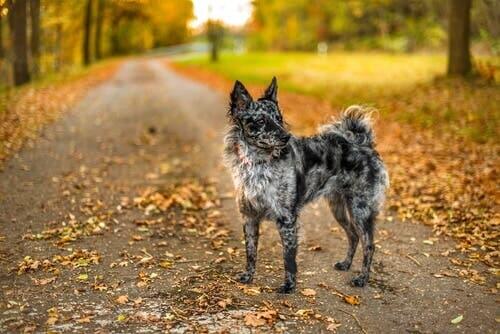 The Mudi looks like a shaggy Belgian Shepherd, but they’re actually a separate breed from Hungary. Despite their size, they’re still capable of herding large cattle thanks to their intelligence and agility.

History of the Mudi

The Mudi’s origins go back to the end of the 18th century. Hungarian shepherds set out to breed a more efficient shepherd dog by cross-breeding their cattle herding dogs with other sheepdogs from central and western Europe.

As a result, the curly-haired Pumi and the Komondor were crossed with shepherd dogs from Germany. The result was the Mudi, a strong, agile sheepdog with erect ears and a willingness to work.

Since then, they have worked in the Hungarian mountains. They’re not very well known beyond this region, but their intelligence has led to success in competitions like dog agility and taken them around the world.

The Mudi is medium in size and has the typical body and proportions of most sheepdogs. Their proportions are somewhat square and they are as long as they are tall.

They have a wedge-shaped head and their ears are always erect. Their chest isn’t particularly broad and their tail naturally rests between their legs, although it can be raised up high when they’re alert. Some Mudis are born with a very short tail or none at all.

Males are slightly larger than females, reaching between 17 and 18 inches tall and weighing between 24 and 28 lb. Females, on the other hand, measure between 15 and 17 inches and, ideally, weigh no more than 24 lb.

The Mudi’s most striking physical feature is its coat, which is wavy or partially curly. The hair over almost the entire body is medium length except on the head (which is short) and the tail, where it can reach 4 inches in length.

Mudi dogs come in different colors but are almost always a single uniform color. They can come in black, white, cream, brown, gray, and blue merle, which is the only variety where different color spots or stripes are allowed.

Mudis are an extremely intelligent breed. They also have an insatiable desire to work, which means that they’re always exploring, investigating new places, or learning new tricks.

This means that they constantly have to be learning, otherwise they will try to entertain themselves and are likely to misbehave. However, positive reinforcement and good training will bring out the very best of this exceptional animal.

Like many other sheepdogs, they’re quite attached to their family and slightly wary of strangers. This makes them a good guard dog, and they’re intelligent enough to be able to distinguish friendly people from intruders.

However, this also means that they’re something of a barker. They’re certainly not silent animals and will let you know as soon as they see anything suspicious. This means that they might not be suitable for living in an apartment block or a shared building.

They’re really active, enjoy long walks, and like playing with other dogs. But they’re also quite compliant. If it’s a bad day and they can’t go out, they’ll be happy to stay at home and spend time with the family.

Caring for a Mudi

Mudis really don’t require very much care, but you do need to brush their fur. Because it’s so long, it can get easily tangled and knotted, and this can cause them some pain and even skin diseases. Ideally, you should brush them once a day to remove dead hair and untangle any knots.

They’re fortunate enough to be very healthy animals and they’re not prone to any particular genetic problems. However, it’s still important to get them regularly checked by the vet and make sure that they’re up to date with their vaccines and de-worming calendar.

If your dog works with livestock, it’s also a good idea to regularly check their feet and ears for splinters or thorns, as well as ticks and other parasites.

The Mudi is quite an unmistakable breed, despite being a relatively unknown dog. This mix of Eastern European cattle dogs and Central European shepherds has created a hard-working, loving, intelligent animal. Would you welcome one into your family?