The Kromfohrländer: A Young and Friendly Breed

This dog is of Germanic origin. They are a cross between the wire-haired fox terrier and the Grand griffon vendéen. They are loving, loyal, and docile pets. These dogs learn easily which make them great pets. 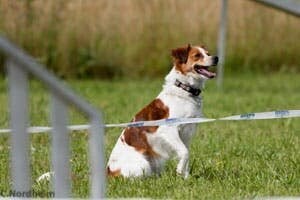 Experts consider this breed to be one of the youngest breeds in Germany. The Kromfohrländer is a medium-sized companion animal, ideal for families and small city houses.

The origins of the Kromfohrländer

In 1955, experts defined the standards of this breed in Germany. This was thanks to a resident of the Siegen area of Westphalia named Ilse Schleifenbaum. She lived near the “Krom Fohr.” In German, this means crooked furrow, which gives its name the Kromfohrländer.

This breed originated shortly after the Second World War. They are descended from the wire-haired fox terrier and the Grand griffon vendéen. The Kromfohrländer inherited their affable temperament from these breeds. Ancestors of this breed are believed to have been regular companion dogs for American troops based in Germany during World War II.

The Fédération Cynologique Internationale classifies this breed in group nine of companion animals. They’re medium-sized dogs whose coats can be both wire-haired or smooth, depending on the animal.

The tail of the Kromfohrländer is medium in size as well. This breed can have saber tails or slight ring tails. However, the FCI requires that their tails match the color of their coat. Also, we recommend not docking their tails. In fact, in many countries, such as Spain, the law prohibits docking tails, in line with the 1977 European Convention on the Protection of Pets.

Regarding height, males usually range between 15 to 18 inches. Females are slightly smaller. These dogs usually weigh up to 35 pounds in males and 30 pounds in females.

Their coats can appear in both wire-haired and smooth varieties. They can also have the following characteristics:

The Kromfohrländer’s coat is usually white with spots that can be light brown, reddish, or darker. These dogs also usually have symmetrical spots over their eyes and ears, which can reach down to the nape of their necks.

Temperament and training of the Kromfohrländer

This companion animal stands out for its great adaptability. They also show intense affection and loyalty towards their owners. Many people describe this breed as docile, quick-learners.

The Kromfohrländer also can become slightly dependent on their owners or families. As a result, they would rather stay inside with the family than outside in the yard. Their attachment to their families also causes them to be suspicious of strangers.

These dogs are also very alert and can serve as a watchdog. However, they aren’t an aggressive breed. If this breed is well-trained and appropriately socialized, they won’t bark too much or be too shy.

This breed is intelligent and they respond to training with positive reinforcements. For example, owners that reward the animal instead of punishing them tend to be more successful in their training. Continuous and consistent training has the most satisfactory results.

After training, this breed also is usually successful in competitive canine sports or agility competitions. They love to spend time near their owners. In fact, they’ll maintain a special relationship with their owners throughout their lives.

German Dog Breeds
As well as the famous German Shepherd, there are other German dog breeds that are quite popular all over the world.  Read more »
Link copied!
Interesting Articles
Dogs
Gordon Setter: The Most Beautiful Pointing Dog