Is There Such a Thing as Dog Alzheimer's?

Certain behavioral changes that happen when a dog gets old might make you think it has this disease. The symptoms also aren’t the same for every dog—they always depend on his personality. 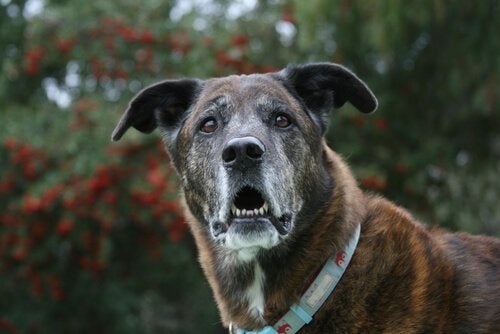 If your dog is getting old, you might be noticing some deterioration in his mind and body. Some of the signs of aging might even make you think your dog may have some sort of dog Alzheimer’s, but is there such a thing?

Here’s the definition of this disease: “a series of behavioral and cognitive changes in dogs that are aging.” It’s a neurodegenerative disorder characteristic of older animals, and it happens to 35% of all dogs. This is essentially dog Alzheimer’s, although that’s technically not correct.

Just like with humans, there is a specific set of changes you’ll see in a dog’s brain. The University of Santiago de Compostela (Spain) has them listed below:

The overall effect of the disease is a reduction in cognitive levels. The American Kennel Club estimates that 60% of dogs between 15-16 will develop this condition.

One of the main problems about studying this disease is that it’s underdiagnosed. The other problem is that the symptoms often make owners mistakenly believe their dog has Alzheimer’s.

Vets use the acronym DISHAAL to describe the major symptoms of Canine Cognitive Disorder. Here’s what it spells out:

Disorientation means that a dog with this disease will wander aimlessly around the house or his surrounding. It might also get confused about the door to his house or spend long periods of time staring at the wall.

This condition also affects his social interactions that consist of major changes to the way he behaves around people and other animals. Dogs with this condition tend to become more dependent, though some might just become apathetic.

Unfortunately, there’s no middle ground when it comes to analyzing these behavioral changes. However, if your dog is usually affectionate and suddenly spends a lot of time alone or is constantly anxious, you should take him to the vet. Every dog has a different personality, and the symptoms usually depend a lot on it.

Sleep-wake cycle changes are also common in dogs with this disease. They sometimes develop insomnia and restlessly move around the house, or whine for no apparent reason. You’ll also notice your dog sleeping more during the day due to a lack of sleep during the night.

As for disorientation, appears due to the fact that your dog can’t focus on what you’re telling him, he forgets habits that learned long ago and it will be harder to get his attention.  Separation anxiety is common with this condition, and your dog might start to be afraid of traveling or meeting new people.

If you do decide to take your dog to the vet, they’ll probably run a series of tests to reach a conclusive diagnosis.

There are also other illnesses with similar symptoms, so it’s important to rule those out first. One specific sign of this disease are deposits of a protein called amyloid beta. If your dog has them, then it’s very likely your dog has Alzheimer’s Disease.

The most common tests include: