Proteinuria in Dogs: What Is It?

Proteinuria in dogs is a pathological condition that results from an alteration in some of the organ systems. In this article we explain everything you need to know about this condition. 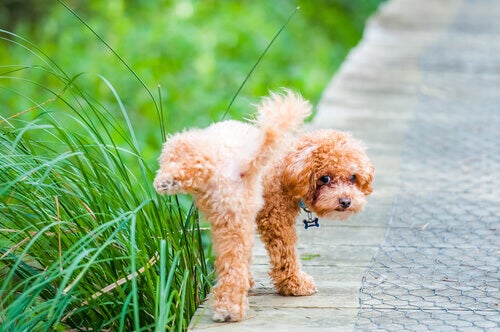 So, proteinuria in dogs: what is it? When faced with clinical cases, vets use certain techniques to find out the root of the problem.

You could say that these signs are like breadcrumbs that lead us to the cause of the issue. Proteinuria in dogs is one of those breadcrumbs, which generally leads us to the kidney. However, it can also lead to problems in other parts of the body.

Proteinuria in dogs: what is it?

Semiology is a fundamental discipline that, among other things, is responsible for cataloging and labeling clinical signs. If we analyze proteinuria from a semiological point of view, we find that:

So, proteinuria is nothing more than an abnormal increase in the amount of urinary protein.

This condition is usually found through the use of test strips. This is very quick, useful, and effective. These test strips have the same function as those used in human medicine to establish the diagnosis of urinary infections, as well as other things.

Proteinuria in dogs: how is it produced?

In order to understand this condition better, we’ve split the causes into three components:

What we mean by this are causes that aren’t related to kidney problems, but other conditions which increase the flow of proteins to the kidney.

Therefore, in this section we can find:

Generally speaking, in these conditions proteinuria is nothing more than a collateral consequence, and it’s rarely a major problem. In fact, it often goes completely unnoticed and is resolved only by treating the primary problem.

When the problem is to do with kidney dysfunction, it produces a failure in its filtering capacity, which then eliminates proteins.

In this section we find various kidney diseases, such as:

These are problems that produce protein elimination, but the issue is between the kidney and the urinary tract.

In this section we can find pathological processes such as:

Proteinuria in dogs: how can it be treated?

This condition doesn’t usually require specific treatment. Normally you can resolve the primary cause and, as a result, the proteinuria recovers naturally.

However, while it’s true that it isn’t a serious problem, you should still be aware of it. It’s still a significant loss of protein, whatever the origin, and it can lead to undesirable conditions such as:

Proteinuria is a sign that goes completely unnoticed by dog owners. As we’ve already seen, it’s found by a series of chemical tests carried out by a vet.

However, while proteinuria, as such, isn’t possible to detect with the naked eye, we can take into account certain important signs which may be related to it. For example:

Microorganisms that Cause Chronic Fatigue in Animals
Chronic fatigue syndrome is a disease that occurs in both people and animals. Below we’ll discuss the role of microorganisms in this disease further. Read more »
Link copied!
Interesting Articles
Care and Well-being
Buying or Adopting: What's Better for Me?