Girl Throws Herself Into A Frozen Lake To Save A Dog 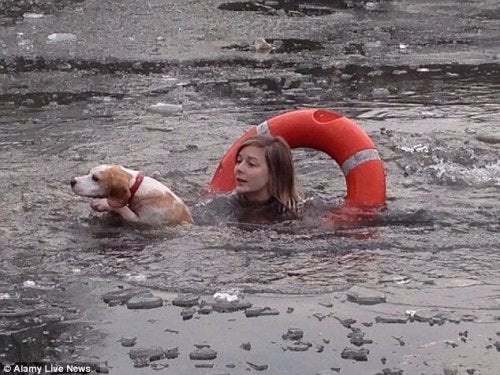 What would you be willing to do to save a dog from danger? Well, Selena Malortie had no qualms about jumping into an icy lake to rescue a dog. We’ll tell you her story.

The event occurred in north London when Gia, a 3-year-old Beagle, was walking through Alexandra Park with her dog walker, Malortie. The dog was having fun chasing some ducks and followed them out onto the ice-covered lake. But the thin layer of ice broke, and the dog fell into the icy waters.

When Malortie noticed the accident, she didn’t hesitate for a second. She quickly took off her coat and shoes. Then, she found a life preserver and threw herself into the lake to rescue the dog. You can watch the video of the rescue here.

Once dog and human were back on solid ground, they were quickly assisted by people who were in the park. They were taken to a nearby cafe where they could dry off and warm up.

Luckily, neither Gia nor Selena suffered any serious consequences from plunging into the icy waters in the middle of the London winter. And as you would imagine, the video of Malortie’s rescue soon spread across social media.

The woman, 31, was considered a hero for saving Gia from the dangerous, icy waters of the lake. However, Malortie shrugged off the praise. She said that she could not even imagine anybody not doing the same.

More about Gia and Malortie

When the accident happened, Malortie had been taking care of the dog for three weeks. According to her, they had really bonded. Gia was actually her first “client.” The young woman had recently started a dog walking service.

Malortie, until recently, had earned a living as a physics teacher in a high school. But her love for animals led her to give up teaching and dedicate herself to animals. Her plan is to start a veterinary program at the University of Cambridge.

Malortie also said that given the adrenaline the situation gave her, she did not even feel cold in the water while saving the dog. In fact, she had completed a first aid course for pets just 24 hours before, so she would have been perfectly capable of helping Gia if she had suffered major problems from the accident.

The owner of the dog, Ina Hristova, also appreciated Selena’s attitude despite some initial anger over what happened. But the Malortie took good care of Gia after the accident and took her home. From what she could tell, the dog wasn’t scared of the frozen lake at all.

We humans are capable of the most heroic acts but also of the most extreme cruelties. Unfortunately animals are the victims of abuse — but thankfully also the motivation for our good actions as well.

One other quick example: a short time ago we heard the news of the Iranian soldier who lost a leg while saving a stray dog. The dog had been trapped in the wires that fenced off a minefield.

As far as the cruelties that many of our species commit daily against other creatures, we report them too often here at My Animals. Today, we prefer to keep the news positive.