Dog Rescues His Friend from a Washing Machine 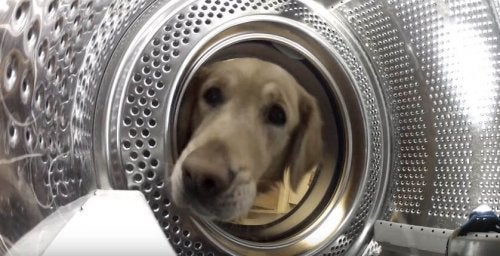 Sometimes our canine friends have toys that mean a lot to them. We’ll tell you about the teddy bear who was a dog’s special friend, and how he ended up in the washing machine.

Here’s the story of a Golden Retriever who wanted to prevent “his best friend”, a teddy bear named Teddy, from drowning in the washing machine. And he didn’t hesitate to go to the rescue. Somehow he knew that his teddy would never be the same once he got out of the washing machine.

Their owners sensed that this Golden Retriever would have some kind of reaction to seeing his stuffed teddy go into the washing machine. That’s why they set up a camera to record everything.

The soap would leave Teddy very clean, and the softener would make him fluffy. But the dog knew that Teddy was going to get very dizzy in the washing machine. So he decided to go to the rescue.

An obsession over toys, even when they’re in the washer

On many occasions, the obsession that many dogs have over objects or toys can have strange connotations. Dogs tend to be very possessive of things that they consider very valuable, as is the case with food or their toys.

Remember that the ancestors of dogs are wolves, who live in herds and are very possessive, especially if their resources are few. Out in the wild,  they respect this important rule: no one can take possession of something that belongs to an upper member in the hierarchy.

On the other hand, experts say that the dog actually questions the authority of its owner when he takes a toy and does not want to return it, ie, he forgets one of the main rules of coexistence. This behavior may be due to the stress and anxiety our friend feels that could not be controlled in time.
In this sense, it may seem funny to see our dog obsessed. However, it would be the same as laughing at a person who has an addiction. In addition, these kinds of problems, over time, can lead to an aggressive attitude towards the dog’s own family and to strangers, among other problems. It is very important in such cases to teach him to share things and respect authority.

If your pet tries to bite you when you approach his food or his bed, it can be disappointing behavior, but it has solution.

This type of aggression for possession is an aggressive behavior of dogs generally shown by grunts, attack attitudes or bites, all directed towards whoever approaches some object that the animal thinks is his. It is also known as resource protection, and usually the owners of dogs are the ones who get the worst of it.

If your pet tries to attack you when you approach his stuff, he is trying to tell you to go back, because he won’t let you take his objects. In almost all cases dogs are possessive over their food, toys, bed and anything else the dog considers his property, even if we think the object is not very important.

The origins of these behaviors can be genetic or acquired. It is normal for some puppies to show this type of attitude with just weeks of birth, and the reason can be a genetic predisposition transmitted by their mothers to protect their resources. In other cases, dogs learn to attack in situations where they feel that there is competition for their things. This may occur with rescue dogs or when you have more than one pet at home.

It is important for us to consider whether it is our own attitudes that stimulate these dogs attitudes to protect their resources. For example, it can be typical for our puppy to steal some object or toy, and run away because he wants to play, and we might run after him, trying to snatch it back violently.  With these actions, we are stimulating their tendency to be possessive.

When our puppies take something, we have to take it back from them playfully, so that they understand that they must obey their owners. Don’t let them associate it with violence or forceful attitudes.
Image source: institutoperro.com
Link copied!
Interesting Articles
Animal Protection
The Sami: The Last Reindeer Herders