This honorable goodbye story just might break your heart 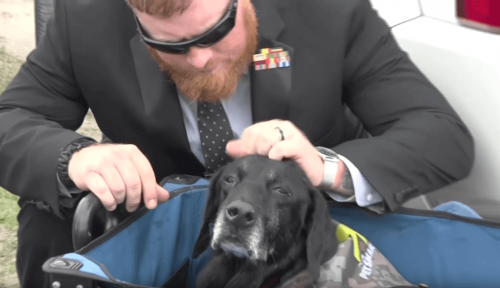 The United States Marines organized a nice goodbye for their good friend Cena. Well, Cena was a dog who had shared many years with them during his service to their country.

We have already seen on many occasions all kinds of work for which dogs can be trained. There are some that serve as guide dogs. Others work as rescue dogs. Yet, additional dogs serve as disease detectors. Basically, they all serve to make life easier for human beings.

A dog named Cena carried out a special job and became a very beloved pet. And, he was a very special coworker. When the time came, his coworkers decided that Cena deserved a nice goodbye. Would you like to hear this story?

If dogs do not go to heaven, when I die I want to go where they go.

Cena was a ten-year-old labrador who had dedicated part of his life to supporting the marines. He participated in three trips that they made to Afghanistan. And, among his jobs was detecting bombs through his olfactory capacities. So, Cena risked his life on multiple occasions. And, he did this for the sake of his owner and other marines.

How did Jeff and Cena become companions? Jeff remembers that in 2009 he took a personality test. And, he matched perfectly with this great labrador. “We were destined to be together,” said Jeff with pride and love.

One day Cena was diagnosed with bone cancer. So, his work in the Navy concluded. The intense pain caused him to be euthanized to end his suffering.

A beautiful goodbye to Cena from his coworkers

Jeff DeYoung was the owner of the noble Cena for eight years of his life. They were partners in Afghanistan, and Jeff decided to adopt him when they retired so that his company could help him overcome post-traumatic stress. But Cena achieved more than that.

I have been with him since I was 19 years old, and he has taught me to be responsible and to always move forward. Today, at 27, I have to say goodbye to one of the most important beings in my life.

Cena was loyal and a friend like no other. During their time together, Jeff assures that the dog kept him warm when he needed it, gave him emotional support when he saw his friends die in the war and was always there willing to risk his own life to save him.

Bone cancer would have ended the dog’s life. However, on the veterinarian’s recommendation, Jeff decided to practice euthanasia, but beforehand, he wanted to give him a last and beautiful goodbye.

A crowded ceremony for Cena

For Jeff, Cena was one of the most important beings in his life. For that reason, he wanted his farewell to be something beautiful that could be remembered forever. So, he dressed in his uniform and wore all of his decorations, took Cena in his arms and brought him like that to hundreds of people who came to witness the act.

The great number of participants demonstrated the town’s affection towards a hero of the United States Navy. Also present at the ceremony were:

Other authorities and institutions of the state, as well as many civilians, wanted to participate in this beautiful farewell to Cena.

Part of the ceremony was a ride in a jeep decorated with a sign that read: “Cancer Response Team.” According to DeYoung, any dog ​​that has served in the marines deserves a nice goodbye like this.

Cena is a reflection of the hard work and courage, perseverance and love for others that these animals show the rest of us. We feel every goodbye that we have had to give to each one of them, but they will always be in our thoughts, our hearts and our memories. Thank you, Cena!

Source of the image: news.televisa.com