Home » Latest News » News » Dogs » Bradley, the young man who saved a dog from being hanged by his own leash

Bradley, the young man who saved a dog from being hanged by his own leash 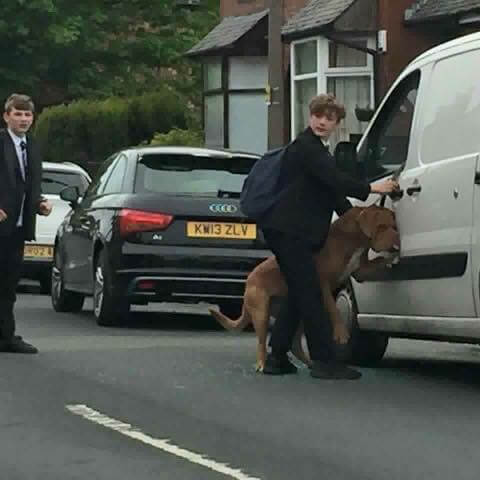 The quick thinking of a 13-year-old named Bradley saved the life of a dog being hanged by his own leash. The event happened in the United Kingdom and, although the media deservedly highlighted the heroic attitude of the adolescent, it also gives us the opportunity to urge you to take care of your pup and protect him from life-threatening accidents.

How a teenager saved a dog from being hanged

Bradley North lives in Prestwich, Manchester. He was coming back from school when he suddenly saw a large dog hurl himself from the window of a van with broken windows.

The dog didn’t get out of the van though; he got stuck and hung from his leash. He would have died from suffocation if not for the quick action of the boy, who managed to free him from his collar. Bradley stayed and comforted the scared dog for 15 minutes until his extremely grateful owner arrived.

Bradley’s praiseworthy actions were photographed by a passerby taking his daughter to school. This is how the story found it way onto social media and then spread through different media outlets.

A young man from the United Kingdom became a local hero when he saved a dog from being hanged by his own leash. Let it serve as a reminder to protect our own pets from life-threatening accidents.

Boo is out of danger

The young man simply said that he did what anyone who sees an animal in danger is supposed to do. He added that he has dogs and hopes that if they were in some kind of danger, someone would help them. The father of the boy, Kevin North, was understandably very proud of what his son did. He called him “my little hero”.

The dog that Bradley helped is named Boo, a Dogue de Bordeaux. Boo is a reminder to us all that unexpected things can happen at any time, and we should do everything possible to keep our pets safe and out of harm’s way.

How to keep your dog safe

Recently we heard the news of a man who saved a dog whose leash had been caught in an elevator. Our point is that although they seem like isolated events, these accidents are quite common.

That’s why you should exercise extreme caution when you leave the house with your dog. Do not leave him alone or tied up on public roads or locked in your car. In addition to the risk of being stolen, he could find a way to escape and then get lost or hit by a car.

In spite of the constant warnings, many people continue leaving their furry friends inside their cars in hot weather. Dogs locked in hot cars are at very high risk of heat stroke.

In addition, think about how fear could make a dog try to get out of the vehicle. Think about how he could end up tangled in his own leash, hanging and close to death.

Be a responsible owner

So be more careful when you go out with your dog. Not all the dogs at risk will have the good fortune to cross paths with a young man like Bradley, willing to act quickly.

Keeping your dog on a leash in public spaces is not just your responsibility, it’s also the best way to control the situation and keep him from escaping, being run over or trying to fight other dogs. Also, you’ll keep pedestrians feeling safe.

In any case, ask your veterinarian about what leash or harness is best for your four-legged friend. You want something that will allow a comfortable, enjoyable walk, despite the leash. Once again, try not to leave your dog alone; we don’t have enough Bradleys in the world.