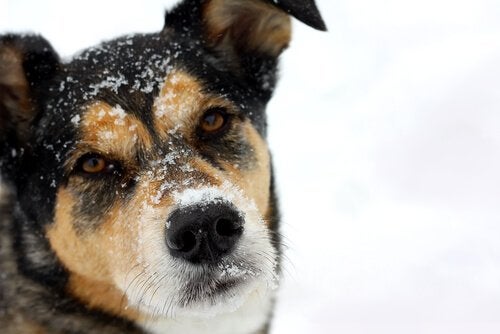 A dog has been found at the top of Mount Elbrus, a mountain in Russia that stands at about 5,642 meters high. The dog was freezing and shivering from the cold when she was found by mountain climbers. They almost missed her, but when they spotted her they then tied a rope around her neck to take her with them. It seems that she had gotten lost, but it’s not known how she ended up in such a precarious situation.

Andrey Orlovski, one of the mountain climbers, stayed with her in Kislovodsk, Russia. They went to the vet, who confirmed that despite the cold, she was ok. Orlovski would have liked to adopt her, but it wasn’t possible.

However, it didn’t take long for her to be adopted. Now her name is Bonnie. She found a home thanks to the kindness of the mountain climber, who posted on social media to find a home for her. Bonnie’s now lives far from the mountains. She and her new owner, Margarita Shovaeva, have a happy, peaceful life.

Search and rescue dogs in Ecuador: an incredible work

There is a reason that a mountain peak is a lot colder than below, despite being close to the sun. It’s because of the difference in radiation that reaches the peak versus what reaches the base of the mountain.

Some atmospheric gases, like carbon dioxide, water vapor, and methane –the greenhouse effect gases– let visible light pass through. However, they absorb the infrared radiation, thereby preventing the heat from escaping. As a result, the temperature on the Earth’s surface is higher than what it should be.

First-aid for frostbite, sunstroke, and hypothermia

If your dog is in intense cold temperatures for a long period of time, he may get frostbite or hypothermia. You will need to examine his ears, extremities, and tail to check for frostbite. Symptoms include pale skin, ear pain, wrinkled and cold skin, etc. If it’s hypothermia, you may see shivering, disorientation, exhaustion, and even seizures or a coma.

Dogs with a double layer of fur, like Nordic breeds, are protected from the cold. Therefore, it’s unusual for it to cause health problems. However, skinny dogs, dogs with short hair, puppies, and elderly dogs are at greater risk. Some breeds, such as Boxers, Dobermans, and Yorkshire Terriers have very little protection from the cold.

To treat hypothermia, wrap the animal in hot towels, give him warm liquids, and put a plastic bag of lukewarm water (covered in a towel) on top of his stomach. Don’t let the bag touch their skin or it could burn them.

Take the dog’s temperature every ten minutes and go to the vet’s office immediately. Hypothermia is a decrease in body temperature under 35ºC (95ºF) caused by extended exposure to low temperatures.

Tips for walking your dog in the winter

Depending on the type of fur your dog has, it may not be a good idea to cut it like you would in the summer. If he’s going to a place where there will be a lot of cold and snow, especially if he’s a breed that’s particularly sensitive to the cold like the Spanish Galgo or other short hair breeds, it’s best to put a coat on him.

If the walk is going to be long, he should also wear something to protect his paws. There are protectors on the market that look like thin insoles.

Another good idea is to use a towel to clean your dog’s paws from time to time. Make sure that he doesn’t lick his paws, since salt is also bad for them.

And if he has been running around, check his pads to make sure that little snowballs didn’t stick to them. If you notice changes in color or areas where it’s painful to the touch, check with a vet and ask about ointments.