The Russian President Vladimir Putin's dog scared a group of Japanese journalists in an interview in the Kremlin - read more to find out what happened. 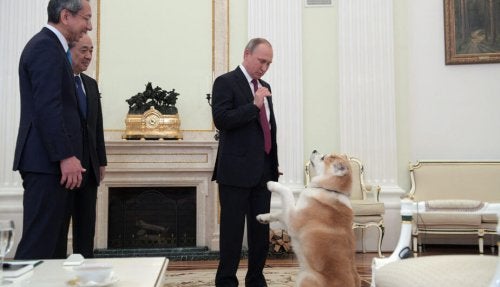 The Russian President has a dog belonging to the Akita Inu breed, which was originally from Japan. The Japanese actually gave him the dog in 2012. With his dog, Putin tries to show his “power” and that he is not someone to be messed about with. During a recent interview, Vladimir Putin’s dog scared a group of Japanese journalists, and here’s what happened.

A short time before an official visit to Japan, the Russian President Vladimir Putin showed off his dog, Yume. The dog belongs to the Akita Inu breed, and he showed the dog off to two Japanese journalists who interviewed him in the Moscow Kremlin.

With the sudden appearance of the official mascot, Putin’s dog scared the reporters a little, according to the surprised journalists’ own words. Vladimir Putin said that since the journalists wanted to see Yume, he decided to introduce her to them – up close and in person.

The Japanese interviewers said: “We are very happy that Yume is such a joyful dog, but she surprised and scared us a little at the start of our meeting with the President.”

Putin recognized that he was responsible for the fright and that his dog is a no-nonsense dog. The Head of State justified the animal’s reaction because there were a lot of people in the room, besides technical equipment and unknown noises. But, at the same time, he was pleased by his four-footed friend, because she carried out her protective role to perfection.

The President of Russia received the dog as a gift in 2012. It was a thank you for the help that the largest country in the world gave Japan after the devastating tsunami in 2011. The representatives of the Akita Prefecture presented him with the puppy and later Putin named her Yume.

As she grew, she became the Head of State’s best friend. She would defend him tooth and nail (if it were necessary).

Origin of the Akita Inu

This breed of dog, which originates in Japan, is considered a part of Japanese national heritage (the same as sumo wrestling and geisha girls).

It’s a dog that’s almost viewed as a good luck charm. Its name, Akita, comes from the Prefecture of the same name, located on the island of Honshu. And, in turn, “Inu” means “dog” in Japanese.

The first time that Akita Inu dogs were heard of was in the sixteenth century (although some say that these dogs already existed four thousand years ago). They were first used as hunting dogs, and, later on, soldiers used them for defense and for attack.

In the Second World War, female Akita dogs were bred with German Shepherds and the pups were sold to the United States. This was the origin of the North American Akita breed of dogs.

They are solid and compact dogs. Akitas have small, round ears and a thick tail that curls upwards. These canines have powerful legs, heavy bones and smooth, fine hair (you need to brush them daily). The Akita Inu are typically white, grey, beige, and striped.

With regards to their behavior and personality, they are docile, independent and active. They are very obedient, but not submissive. One of their foremost qualities is loyalty towards their owner.

These dogs feel very close to their owners and can tend to mistrust other people. The Akita Inu is, above all, a guard dog and has the capacity to remain patient in stressful situations.

They are very large dogs, but can live in quite small places as long as they have exercise every day. These canines don’t bark that much, but they actively defend their territory. They learn quickly, are vigorous, love children, and become the dominant leader if there are other dogs around. The Akita doesn’t normally destroy objects when it’s a puppy. 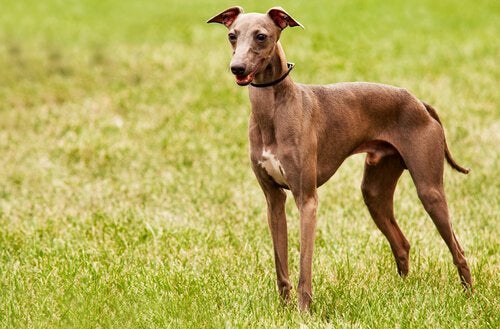