How to Keep Your Dog from Eating Too Fast 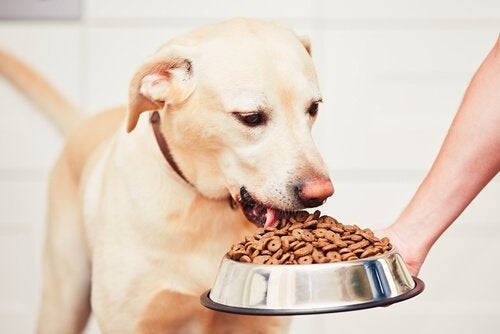 It’s common for dogs to eat too fast. This behavior can be detrimental to dogs because it can produce bad digestion and an upset stomach. Things can get even more complicated if the habit is not corrected. How can you prevent a dog from eating too fast?

As soon as you put the plate on the ground or some food drops out of the package, the dog is desperate to eat. It pounces on its plate and starts to swallow the food (without chewing it). If it’s hot, the dog can even get burnt in the process. In a matter of seconds, the dish is empty, and the dog asks for more.

If this situation seems familiar to you, don’t hesitate to read the following article. We’ll tell you how to prevent your dog from eating too fast. You’ll find that you can fix this problem in no time!

Is it possible to keep a dog from eating too fast?

Mealtimes can be very hectic.

Most pets eat too fast without even chewing their food. This is a classic habit linked to survival instincts. Like their “cousins”, the wolves, dogs scarf down food in order to avoid sharing it with the rest of the herd.

By eating quickly, animals take advantage of being “lucky” enough to have food. They are trying to make sure that they get enough to meet their needs, before another animal can come and take the food away. It’s really that simple.

Of course, this is something that we humans can’t really understand, because we consistently provide our pets with enough daily food. However, that doesn’t seem to matter to our furry friends. They continue to pounce on the plate and gobble up whatever we give them.

It’s extremely important to keep your dog from eating too fast. Eating in a hurry can cause many health problems. There’s even the possibility that your dog could choke on dog food if he swallows it without chewing.

Another consequence of eating too fast is that the animal swallows air. This will cause gas, in addition to gastric problems. Belching and gas are a clear sign of stomach upset or poor digestion.

On the other hand, it’s even riskier for a dog to habitually eat fast when it eats bones or “human” food instead of dog food. This is because a bone splinter can pierce his esophagus and other organs. The risk of suffocation increases significantly if you don’t correct this habit in time.

Finally, the most dangerous thing about eating too fast is the risk of gastric torsion (dog bloat). The animal could die if not treated in time. Gastric torsion occurs when, because of excess weight, the stomach literally “detaches” from the muscles and tendons that keep it in place, and separates from the intestine.

The symptoms of dog bloat are as follows:

If the dog shows signs of being ill, it’s important to take him to the vet as soon as possible so he can get the proper treatment (in some cases,  surgical intervention may be necessary). Don’t ignore these warning signs if you want your pet to live.

Tips for preventing your dog from eating too fast

If your pet seems anxious and desperate to get to the plate at mealtimes, and doesn’t chew his food adequately, pay attention to these tips:

1. Put the dish upside down. The bottom of the dish is smaller than the top. It also has a strange shape that will make the animal put extra effort into finding the food. You can also buy a special dish that distributes the food among different compartments. Another option is to serve food in a cupcake baking tray, or just place a large stone in the center of the dish to make finding the food an adventure.

2. Give him a toy with the food. Pet stores sell special toys that you can fill with food. As the dog bites the toy, the food falls out. These are great for bringing out your dog’s hunting instincts and for letting him have some fun, too!

3. Limit portion sizes. If you normally give him a big meal at night, offer him half in the morning and the rest at dinner, for example. While this will not prevent the dog from eating too fast, it does prevent probable gastric torsion at least. It’s also a good way to keep your pet from becoming overweight.  If he eats twice daily, he’ll burn calories each time he digests food.