Home » Training » The Dog Professor at the University of Southern California

The Dog Professor at the University of Southern California

There's no doubt that dogs have a lot to teach us. But would you have ever thought you'd read an article about a dog professor? 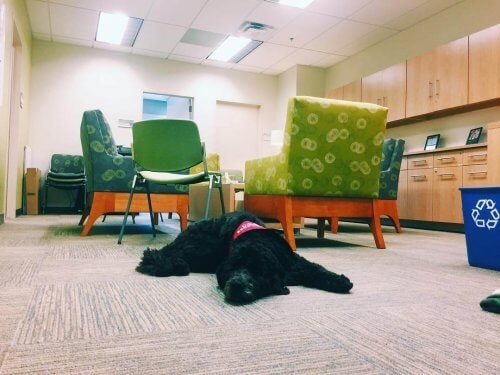 Professor Beauregard Tirebiter, Beau for short, is a new staff member at the University of Southern California. However, there’s one small detail we should mention: Beau isn’t a person, he’s a dog. Meet Beau, the dog professor!

Beau is a black golden doodle (a cross between a golden retriever and a poodle) and he’s two years old. This animal is known as the ‘welfare dog’. He’s similar to a therapy dog, but he works at a large university. That’s because Beau was trained to work with a large number of people on a regular basis.

In short, this dog’s job is to help lower students’ stress levels which, in turn, will improve their academic performance.

Beau even has his own place in the Office for the Promotion of Health and Welfare at USC. In addition, he has specific hours to work with the students and the idea is that the students can interact with him in different parts of the university.

Have you ever thought of having a dog as a professor? In reality, Beauregard Tirebiter, Beau for short, is a ‘wellness dog’ that helps students at the University of Southern California to lower their stress levels and improve their academic performance. This dog definitely has a lot to teach us, and has earned his title as dog professor.

What does Beau the dog professor do?

According to Professor Olga Solomon, a member of this educational institution, positive interactions with dogs generate feelings of well-being and calmness. That’s because petting, or playing with, a dog usually increases certain hormones and chemical levels in people. As a result, people feel happier and their stress levels are reduced.

However, the idea is that Beau, in addition to helping students with their stress, will also generate a sense of community in the university. Additionally, they want him to help students who feel apprehensive when it comes to accessing the resources available at USC.

Amanda Vanni, the dog’s trainer, works with Beau on a daily basis to help him effectively carry out his duties. The dog also now has accounts on Twitter, Instagram and Snapchat to help him reach more students.

Unfortunately, the truth is that stress is often the reason that students drop out or perform poorly in school. Therefore, universities are working to create solutions to this problem. That’s why USC chose to bring Beau to campus, and it’s definitely helping.

Different research has proven that interacting with pets increases the substances in people that make them feel happy and improve their well-being. Among those substances are:

But that’s not all. Petting and playing with a dog can also decrease one’s cortisol levels. This is a steroidal hormone that’s produced by the adrenal gland and that’s released as a stress response.

Animals have a lot to teach us

At this point, there seems to be no doubt that dogs have so many different things to offer us.

That’s why it doesn’t actually sound so strange to hear that there’s a dog professor at the University of South California.

In his position, Beau will be able to teach his students many things, as long as they come to visit him in his office in Los Angeles, California. 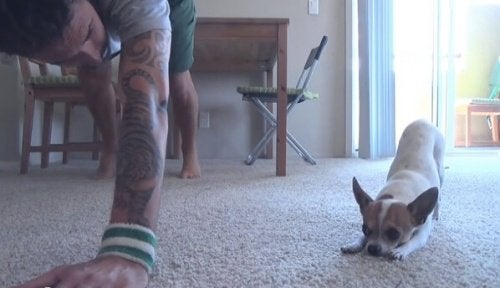 Meet the Pancino,The Dog That Practices Yoga
Meet Pancino, the yoga practicing dog. Read this article to get advice on developing a relationship like this dog has with his owner. Read more »
Interesting Articles