While we may be proud to say that 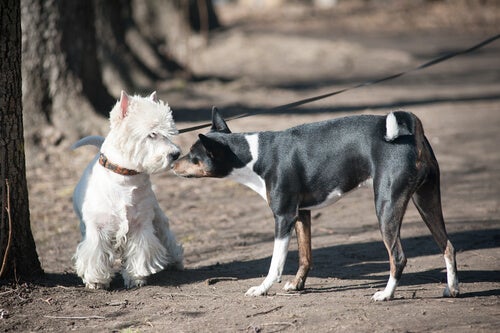 In this article we’ll share the kinds of things that make dogs panic so that you’ll know how to help him and reduce his anxiety during these situations.

Panic attacks and fears in dogs

Although you might think  animals don’t suffer as much as people do,  it’s just not true. Our furry friends also struggle with phobias, panic attacks and fear. Not to mention the stress or anxiety brought on my certain situations or changes.

In order to see if a dog is scared to death, we can watch for certain signs:

How can you help a scared dog?

Often, we want to do something to help our dog get past the crisis. But, it actually ends up having the opposite effect. Perhaps, he becomes even more afraid! That’s why we first recommend that you do not scold him. And, don’t speak in a commanding tone. In these  moments the last thing needed is to increase his desperation.

It’s also not a good idea to pet him to try to calm him down, as the animal might interpret it as an abnormal situation and that some kind of danger exists. Another piece of advice that might help is not to restrain the dog against his will. By this I mean it’s best not to embrace him nor press him against yourself, because you might make him even more nervous and he could become dangerous and try to attack you.

Finally, don’t change your routine or show that there’s a problem. Try to behave as if nothing were happening and the dog  will calm down on her own and go back to normal again.

Dogs are very afraid of…

While every animal is different and some breeds or pets are considered “scaredy cats” in comparison to others, the truth is that dogs are more or less scared of:

This includes thunder, storms, fireworks, screaming, vacuum cleaners, lawn mowers, hair dryers, sirens from fire trucks, ambulances or the police, etc. Dogs’ hearing is better than ours (up to 4 times more sensitive) and they have the ability to register…35 thousand vibrations per second! Imagine what is must be like for them when they hear the rain beating against the window.

Even is the dog has grown up with pets in the house, dogs usually feel uncomfortable when faced with another furry little guy. It’s not about jealousy but rather that he doesn’t want to share his space with someone else from his species. In the majority of cases where an animal is scared of others it’s because it was not socialized well as a puppy or it was separated from its mother when it was very little. And if we add the fact that people tend to humanize our pets and treat them like children, they often don’t naturally love being outside nor interacting with others similar to them.

It all depends on what the dog’s experiences have been like since he was just a puppy. For example if he was abused in the past, it’s likely that he will be scared of someone that resembles or has something that reminds him of that traumatic event (a broom stick, a belt, a shoe, etc.). Dogs don’t harbor bitterness, but it’s hard for them to trust again.

If the animal is too spoiled and doesn’t go outside often, it’s likely that she will be scared of new experiences like a car driving by, being with a small child or moving.

These are the things that dogs are very scared of. Try to avoid them and correct them, to the best of your ability.