Blind Labrador Retriever Survives in the Woods for a Week

The true story of loss and discovery will lift your spirits 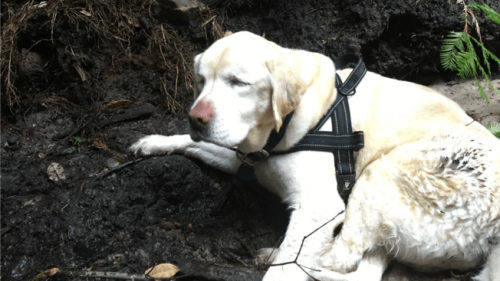 On this occasion we bring you a story of overcoming, love and courage. This piece of news is brought to us from the United States, where a blind Labrador Retriever survived alone in the wood for a week. Learn more about her below.

In spite of not being able to see, the precious little dog was able to survive 7 days in a wooded area after losing her way from her family. She was found by a man that went hiking and came across her by chance. The name of the protagonist of this story is Sage. It’s a story about a 12-year-old Labrador Retriever that lives in the state of Colorado in the United States.

Her owners couldn’t find her after going for a walk in a wooded area. After hours of an exhaustive search they couldn’t find their beautiful, blind Labrador. The rangers told them that since it was such a large area and she was blind, there was no hope of seeing her again.

Although dogs that can’t see are guided by their nose and their ears, these senses were also deteriorating in Sage due to her age. The dog suffered from glaucoma, which is how she lost her vision. In addition, she has recently been diagnosed with a tumor.

The owners spread the news of losing Sage. They put pictures of her around the whole city with the hope that someone would see her and take her home. The Cole family offered a reward of a thousand dollars for anyone who would bring her to their home. But days passed and there was no sign of her. They even went so far as to hire a professional canine seeker but they had no luck. The blind Lab did not appear.

When more than a week had passed they had nearly lost hope of finding her and were preparing themselves for the worst. Until a man named Dan Estrada (paramedic neighbor of the family) was walking in the woods and saw something light colored, supposingit was a bag of trash.

When he approached, he saw that it was a dog lying on the edge of a river. First he thought that it had died because it wasn’t moving. But, he realized it was breathing. So, he rushed toward her and wrapped her in his arms. Then, he gave her a big kiss. Sage raised her head and prepared herself to be moved.

As the dog was numb from having spent so many days outside, the man has to carry her uphill to a road where she was then placed in a car and brought to the forest exit.

When they arrived at the home of the Coles, the father wanted to give the reward money to his neighbor. But, the man refused to accept it. Instead he proposed that they donate that amount to an animals shelter. Besides talking about survival in this story, there was no lack of love, solidarity or charity.

The story of a blind dog and his four legged guide

Now, we’ve told you the sweet story of the blind dog that survived in the forest for days. So, we’ll take the opportunity to tell you all another precious story with many lessons. It is starring Hoshi (an American Eskimo) and Zen (a Pomeranian). They are inseparable friends. And one of them is blind. But, that doesn’t matter because they enjoy tons of adventures together.

Hoshi was diagnosed with glaucoma when he was 11 years old. Then, he had to undergo surgery to remove his two little eyes. The family decided to adopt a little puppy to accompany him in his last days. And, they named this puppy Zen. Then, they got along well and became inseparable.

The owners put a harness around them so that they would walk always be side by side. Without any professional help Zen became Hoshi’s guide, who now sees through his friend. The rides are slower due to the condition of the American Eskimo. But that doesn’t keep them from having a lot of fun together.

The beautiful friendship was named “The Fluffy duo.” And their pictures and videos showing hundreds of adventures can be seen on an Instagram account. In fact, the account already has more than 30 thousand followers.

Without a doubt, Hoshi trusts his friend-guide Zen because he knows that he’ll never leave him and will always guide him.

Source of the imagines: www.telemundoareadelabahia.com