All About Symbiosis in Animals

Symbiosis is a beneficial relationship for both species, such as when birds feed on the parasites found in a mammals fur, for example. 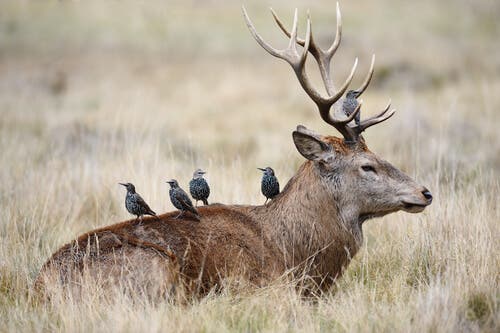 To live together on this planet, it’s essential that we strengthen our relationships and ties with one another. However, this isn’t just limited to humans. Symbiosis in animals is the perfect example of peaceful coexistence between different species where both parties benefit. It’s really quite fascinating!

Types of symbiosis in animals

Symbiotic relationships can be either good for both parties or detrimental to one of them. A clear example of a detrimental relationship is that of mosquitoes and people. However, in any case, we’re talking about an evolutionary process whereby animals have learned how to relate in order to help each other.

Symbiosis can develop in various situations, and each relationship will have its own inherent characteristics, whether it be the physical space they share, the duration of the exchange, how receptive they are, etc. There are three main types of symbiosis in animals:

In this case, the relationship is only good for one party. The other party is likely to see them as annoying or even bad for their health.

Common parasites include lice, fleas, ticks, and many others. No parasite can live without its ‘host’ since they normally feed on their blood and need to be living on the animal’s skin or hair.

This is where one party receives benefits from the relationship but the other party is not harmed by it. Commensalism is very common in marine environments where, for example, a remora fish attaches to the belly of a shark in order to move around.

In this relationship, both parties benefit in one way or another. Believe it or not, this is very common in nature and doesn’t just occur between animals but also animals and plants.

One good example would be the relationship between sea anemones and clownfish. They protect each other from all kinds of underwater predators.

However, the clearest example of mutualism between animals and plants is the relationship between bees and flowers. The bees extract the pollen and carry it attached to their legs. But on the journey, some particles will fall off, allowing the pollination of other flowers.

More examples of symbiosis in animals

As well as the ones mentioned above, there are dozens of close relationships between living creatures. Here are just a few that stand out:

These two animals have a really interesting relationship. The anemone’s stinging tentacles protect the crab from predators. Meanwhile, the crab’s ability to move helps the anemone to move from one place to another.

These crustaceans feed on the parasites living in the scales of fish. In exchange for this ‘cleaning’, they can use the fish as a shield to avoid being eaten by predators.

Scavengers such as hyenas and vultures are animals that feed on the remains left over by other larger animals like lions or tigers. In this case, the symbiosis comes from the fact that they have effective ‘permission’ to eat the remains without needing to worry about these larger predators.

Some insects look to deposit their eggs on the skin of mammals. When the eggs hatch, they then become parasitoids and feed on the tissues of the host’s skin.

This is a clear example of mutualism where both species benefit. The aphid secrets a thick liquid rich in carbohydrates to better attach to plants. The ants then feed on this ‘nectar’ when outside of the nest. This is how they defend their friends from attacks by predators, including birds.

Animal Metamorphosis: What Is It?
Animal metamorphosis is a biological and natural process where a creature changes during the course of its life. Various different animals experience this. Read more »
Link copied!
Interesting Articles
Animals
6 Animals that Can Suffer from Depression