Animal Facts: Do You Know What A Caracal Is? 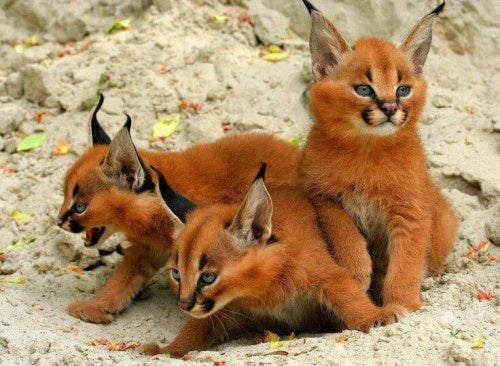 Here at My Animals, we love any and all species, regardless of whether they are domesticated. When the animal in question is related to one of our favorite pets, we simply have all the more reason to love them. Today we are discussing the caracal, a very peculiar and wild feline with whom you will fall in love as soon as you learn more about it.

Although it may be true that when we talk about felines, we mostly think of cats or perhaps even tigers, the caracal is also a very special feline that you should get to know, even if only out of curiosity. More than anything, though, because it could prove to be a bit difficult to have one at home. So, what do you need to know about the caracal?

Characteristics of the Caracal

This highly unique animal looks like a large cat with the face of a cuddly kitten, but the body of an athletic panther. Its name comes from the Turkish word “karakulak”, which means black ears.

This is due to the fact that their ears are the most characteristic feature of this wild, but beautiful, animal. They pointy protuberances that seem to coil at the tips of their ears and gradually darken until they reach a deep black. This allows them to have a very refined sense of hearing, facilitating their key task as caracals: hunting.

Although caracals seem to have a smile drawn on their faces, similarly to sloths,their intriguing gaze makes it easy to see that they are not smiling, so it is best that you avoid approaching one unless it is domesticated.

Their coat may seem boring, since it is all the same color: a beautiful shade of cinnamon. However, all of them have their signature black ears, of course. These specimens’ unique color is very useful come time to camouflage, since the caracal lives in arid lands and deserts, meaning its cinnamon color blends perfectly with the tone of the sand in its habitat.

The Caracal: A Great Hunter

We have always said that both house kittens and cats demonstrate great hunting instincts because of their ancestors. The caracal is one of our feline pets’ ancestors. Although they can sometimes eat rodents, the caracal’s favorite food is birds, and they have a unique ability to hunt them down.

It has been said that, at times, they can hunt up to 12 birds at a time. This is quite an achievement considering the fight or flight instincts that birds and other flying species have.

Despite not being one of the largest cats around (it is considered medium-sized), the caracal is able to achieve great speeds, because his small head along with his athletic body make it a breeze, no pun intended.

Can a Caracal be Domesticated?

Yes, a caracal can be domesticated. Although there are many people who are frightened upon seeing them, since their presence and gaze are somewhat intimidating. When they are cubs, they are adorable animals and seem like the most beautiful kittens you have ever seen.

Despite its natural instinct, a caracal can be tamed and kept at home just like any other pet. Of course, any animal that is taken home as a pet must come from a family that has already domesticated it, and from a home where the animal has lived among humans.

Even though they seem like cute little kittens when they’re babies, as Tweety would say, we must not fool ourselves. They are wild animals that need to live in their natural habitat, like any other animal does.

Where Do Caracals Live?

This is something that makes having one as a pet pretty difficult, unless you live in the African continent. You can find some of them in the North of Morocco, and towards the area of ​​Nigeria or Ghana without finding any in the center of the continent. Even so, they have been seen again recently in the Eastern part of Tunisia and Ethiopia, as well as in the South.

As it stands, we are unsure of why this great geographic distance separates them from each other. Maybe it’s because of their independent nature and not wanting to belong to a pack that leads them to distance themselves.

There is no doubt that the caracal is a spectacular animal that is worth knowing. Would you ever want one as a pet?