There are many legends related to the food that is served in Chinese restaurants around the world and jokes are even heard that there are no cats or dogs left on the street. 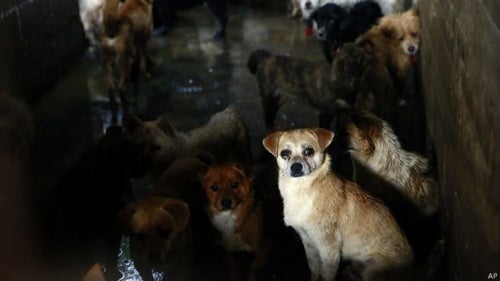 Jokes about dog meat may seem funny to us until we know about the crude reality and the degree of certainty that this has with respect to dog meat. Today will tell you about the festival that began in China in 2010 and that activists are trying to stop year after year.

There are those that say that eating dog is like eating any other animal and that there are just mental barriers created from growing up with the life we’ve had. Others see a cruelty to the situation. For us, My Animals, we won’t put ourselves on either side of the argument, but will limit ourselves to inform about a happening in China that activists want to stop: the dog meat festival.

This festival began in the country in the year 2010 and according to beneficiaries, restaurants in the area, it’s an event that praises the cultural Chinese value.

Every summer (celebrated on June 20), this festival sacrifices between 10 and 20 million dogs to feed all of the residents of the area in China and also those that visit with the only objective of trying their meat.

At least 10,000 dogs are sacrificed only in the region of Guangxi in the interior of the country. Many of these dogs are stolen from their houses, enraging their owners, and end up being served on a plate that will be tasted by the highest bidder.

This festival has come to generate so much controversy that the local government has prohibited its workers from going and has limited the size of the event.

How do they treat animals?

Many could think that if it’s the cultural barrier that has made us reject this kind of meat, but in China it’s always been eaten and therefore they don’t have the same cultural barrier, why do the activists want to stop the dog meat festival in this Asian country?

The answer is simple: the treatment received by the animals. According to them, this festival was not created merely to grow the culture of the country but rather to fill the pockets of the restaurant owners at the the cost of ignoring these rules:

Activists, taking advantage of the voice of government locals, that although they try to wash their hands have taken measures in which they’re more concerned, they want this festival to stop being celebrated immediately. Their battle is that on June 20 no Chinese person would eat dog meat or cat meat in the country. Will they get there? That still is yet to be seen, but what is clear is that they’re not going to stop until they get there.