Black Cats: interesting myths about them

These cats were revered in Ancient Egypt, considered to be gods, and were also burned at the stake in other places for being related to witchcraft. 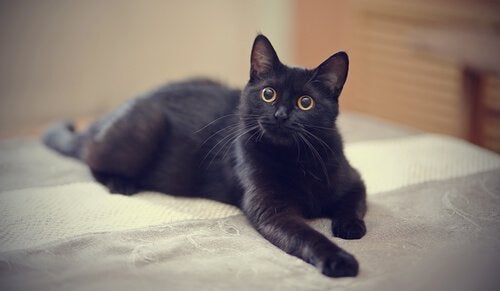 Black Cats: from respected to hated

The relationship of humans with felines dates back a long time. For example, in Ancient Egypt, cats were considered as the messengers of the gods. Also, one the main deities, Bastet, was shaped like a cat and represented the sun.

The pharaohs had pet cats of all colors. These cats were also buried with him in order to protect them against evil on the way to the afterlife.

In Victorian England and Scotland, people believed that if newlyweds found a black cat at the entrance of their new home, it symbolized prosperity and happiness during their marriage.

Sailors always tried to have black cats on their boats because they were considered as good luck. Also, their wives would take one home to “make sure” their husbands would return safe and sound from the high seas.

However, this positive symbolism changed over time, especially during the Middle Ages in Europe. At that time, cats were associated with witches. This was due to their nocturnal habits. It also was particularly applied to black cats since ‘witches’ dressed in black. Some people even believed that witches transformed into black cats at night to hunt and do evil things.

However, the negativity that surrounds cats is nothing new. According to Hebrew and Babylonian traditions, cats were compared to snakes and were evil. There was also a legend told in Wales and France about Cath Palug. This was a monstrous cat that terrified all the inhabitants of the island of Anglesey until King Arthur killed him.

People were in awe of a black cat’s gaze because they believed the animal had a way of enchanting them. If someone had a black cat, they were considered to be satanic or were associated with witchcraft. Therefore, when they caught, both the cat and the owner were persecuted. They were sometimes even executed by being burned at the stake.

According to a document from the thirteenth century, “all people who welcome a black cat into their house, run the risk of being condemned at the stake for practicing witchcraft.” The Catholic church added to this persecution and on the nights of Saint John, they burned cats.

In the United States in the city of Salem, black cats were captured during the well-known “witch hunt.” This was because people believed that women were able to transform into black cats and do evil deeds at night without being recognized, which was a similar belief in Europe.

In 1881 in France in the Parisian district of Montmartre, a well-known cabaret was inaugurated and visited by famous artists, like Pablo Picasso. The name of the establishment was “The Black Cat” – Le Chat Noir in French. A poster used to advertise the club has become famous worldwide.

The ongoing myth of black cats

Superstitions have been continuing to exist for many years. People also came to believe that cats were carriers of certain diseases. If a black cat crossed your path on a full moon, this meant there would be an epidemic. In Italy, there is a belief that if a cat climbs into the bed of a sick person, this person will die shortly afterward.

While many ideas about black cats were lost in time, popular culture still has some have painted a negative image of this animal. For example, black cats are generally the last ones to be adopted in a litter. People prefer white, brown, or calico cats than a black one with green or yellow eyes.

There are also still people who, if they see a black cat crossing in front of them, take three steps backward to avoid getting “cursed.”

However, there are also many people who have named their business after black cats. In Buenos Aires, Corfu, and Nantes, there are coffee shops under that name. These shops have been open to the public for several years. Another reason to believe that these beautiful animals aren’t cursed after all!