Boy Sells his Skateboard to Buy Medicine for a Stray

Across the globe, individuals step out of their day-to-day routine to help animals in need 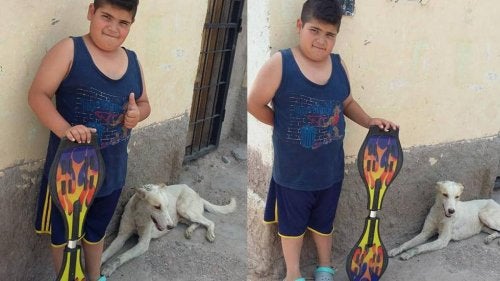 Children and pets have a more than special relationship. Beyond the friendship and the games between them that really move us, there are also stories that are worth telling. As, for example, the one of this boy who sells his skateboard to buy medicine for a stray dog.

A child buys medicine for a stray dog

The story of this article developed in the province of Mendoza, in the south of Argentina. Mauco is a 9-year-old boy who encountered a stray dog while playing on the street. So he took it to his house to give it food and shelter. He named it “Rocko”.

The boy lived alone with his mother and did not have many resources. Therefore, Mauco became very sad when the lady told him that she did not have the money to pay for medicine for his new friend, who had injured one of its legs.

The boy did not give up and found a solution to help his puppy. Upon returning from school after visiting the vet, he asked his mother, Laura, to lend him her Facebook account. Then, he would post the following:

“Hi, I’m Mauco, Laura’s son. She loaned me her Facebook because I do not have one. Look at this little dog that I found on the street. It is sick, and it has a broken leg. We gave it feed it and bathe it, but it needs medicine. I am selling my skateboard so I can take it to the veterinarian. If someone is interested, leave your number here, and my mom will call you. Thank you”.

What Mauco never imagined is that many people saw the message, published it on their walls and received so much support. Thanks to the help of strangers, the dog was treated in time, and they could save the leg. And besides, the boy did not have to sell his skateboard to get the money.

Ken, the boy who founded a dog shelter

Mauco’s story is not the only one that we will tell in this article. There are many more that fill our souls and make us believe in the solidarity of children. In this case, we will talk about Ken, a little boy who, at only 9 years old, managed to found his own shelter for stray dogs in the Philippines.

With the help of his father and some donors he contacted on the internet, this little boy fulfilled his dream. He managed to build houses for abandoned dogs. For some months, Ken had been helping all the animals he saw on the street. He spent time with them, gave them food and cuddled with them.

The boy’s father took a picture with two stray dogs and put it on the internet to raise money. People from all over the world began to help him. They received high quality canned food. Also some veterinarians offered to assist them for free. Thus, with the donation money, they built a temporary shelter for the three animals, whom he named Brownie, Blackie and White Puppy.

In the house’s garage, “The club of happy animals” began to work. The dogs were recovering and their wounds were healing. Soon after, he was able to sign a year-long contract in a space near the house so that the dogs could live better.

The non-profit animal shelter will be operational shortly. Ken proudly shows photos of his dogs and the progress of the home that they are building for them. In addition, he said he received help from all over the world, like from a soldier who donated money in memory of his dog who died at age 14 and also from a group of students from the United States who collected money to send to the Happy Animals Club.