Cloning Animals: Is It Possible?

We've always lived surrounded by clones that exist in nature. This led scientists to wonder if it's possible to do this artificially. Years later, animal cloning began and with it came Dolly the sheep. 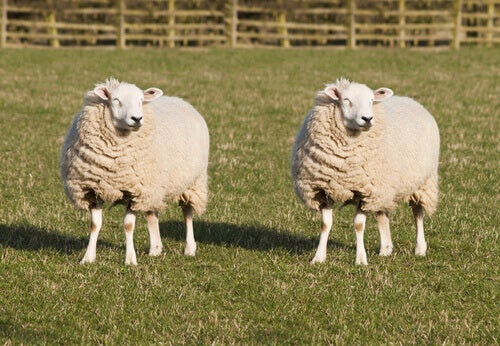 In 1996, scientists created the first organism as a result of cloning animals: Dolly the sheep. Since then, researchers have experimented with livestock for reproductive purposes and other applications, such as for therapeutic use in biomedicine or animal conservation.

This topic has been the subject of debate within the scientific community and society as a whole. If you want to learn more about cloning animals, keep reading!

After the discovery of DNA, scientists wondered about using molecules, which contain all information about an organism, to create another organism that is exactly the same.

Cloning animals involves creating genetically identical copies of a living being. Researchers obtain a DNA sequence from a donor animal and use this to create an identical sequence. They can do this from either a cell or using the entire organism.

While this may seem like a new process to us, the process of asexual reproduction, in which there is no fusion of sex cells, has always existed in nature. For example:

Cloning like this occurs in many beings, such as cattle, pigs, sheep, and goats, as well as other animals, such as mice, rabbits, dogs, and horses.

In fact, cloned animals are born like other animals, like identical twins born at different times. Just like twins have the same DNA, clones have the same genetic material as the original organism.

In 1996, Dolly was born at the Roslin Institute in Scotland. She was the most famous sheep in the world and the most important in the field of biomedicine.

Dolly was cloned from the nucleus of a mammary gland cell of a six-year-old Finn Dorset sheep. Researchers introduced this nucleus into an unfertilized ovule. Then, after many attempts, the first cloned mammal was born.

During her lifetime, Dolly gave birth to six young, which proved that cloned animals can reproduce naturally. However, in 2003, researchers had to euthanize her since she had several diseases, such as arthritis and lung tumors.

Although this breed of sheep can usually live up to 12 years, we shouldn’t be surprised that Dolly only lived six years since she developed from an adult cell of a sheep that was already six years old.

Perhaps this is the most interesting question about this subject since there are various ethical considerations.

Researchers cloned Dolly as part of research in creating drugs in sheep milk. Since then, scientists have used this technique in different animals for drug development and advancement in genetic engineering. However, there are other purposes.

For example, during mating or giving birth to livestock animals, there’s a high risk of sexual injury or disease transmission. So if the goal is to obtain as many offspring as possible, natural mating is not the most effective.

As a result, assisted reproduction is common. In fact, this is the method that most breeders use. For a while now, ranchers have selected animals with the most desirable qualities to pass on to their offspring. This ensures that these traits come up in the following generations.

Therefore, cloning allows breeders to control the characteristics of their livestock.

Below, we’ll look at some other benefits of this procedure in livestock.

Livestock farmers are not interested in animals that have diseases. This is not only because of the additional cost of medicines and veterinary consultations but also because it affects the production of meat and milk. As a result, it’s more profitable to have health and disease-resistant beings in a herd.

Animals adapted to the climate

Cloning allows farmers to select animals that develop best in the temperature and humidity where they live. This way, the animal will adapt more and more to the environment and will be able to produce high-quality food.

Of course, breeders always look for the best qualities of each type of animal. For example, bigger cows are better so they can produce more milk and be more fertile, just like bulls.

Eating cloned animals: Is it safe?

If you’re wondering if you can eat meat from a cloned organism, the answer is yes. The FDA (Food and Drug Administration) ensures that products obtained from cloned animals are as healthy and safe as those from any other animal we consume.

Also, keep in mind that the main purpose of cloning animals is for breeding.

So what do you think?

We can confirm that animal cloning is possible. It’s true that researchers have conducted this procedure successfully for years. Also, it’s very useful not just for livestock farming, but also has numerous health benefits for people in the field of medicine.

But is it OK to modify the natural order of things for a uniquely human benefit? This is still up for debate!

Dog Cloning – Is It a Legal Business?
Today we'd like to discuss whether the dog cloning business is legal and ethical. To do so we must study the context in which it takes place.  Read more »
Link copied!
Interesting Articles
Farm Animals
The Acclimation Capacity of Animals and How it Influences Farmers’ Choices