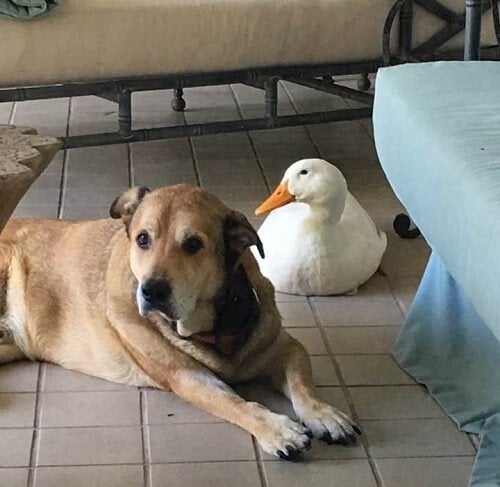 Animals are constantly surprising us in different ways. Even though the bond of “friendship” between distinct species isn’t anything new, hearing all about new stories won’t stop touching our hearts. The following story is about a depressed dog who regained his thanks to a duck.

A story about friendship between animals of different species

Two years ago, a 12-year-old dog George lost his lifelong friend, a Labrador named Blackie. Since then, he hasn’t gone a day without crying; his anxiety and distress brought him to the verge of death a couple of times. His owner, Jacquie Litton, never gave up on trying to cheer up her dog. However, she couldn’t figure out a way for her dog to regain the will to live.

All of a sudden everything changed out of nowhere. A duck appeared on the porch and approached the depressed dog. Since then, the dog and bird have become inseparable. As of that moment, George completely stopped mourning the death of his friend Blackie.

The most amazing part of this story and yet most puzzling for the readers is that the duck entered the dog’s life during the week of the second anniversary of the Labrador’s death.

A dog depressed for the death of Blackie his 12-year-canine playmate, is now happy again. All thanks to a duck that suddenly appeared in his life.

Litton says that she has no idea how the duck got inside the house. She decided to name him Donald. “After all, we are a Republican family,” she jokes. One thing is certain, the immediate relationship the bird established with George doesn’t stop being a surprise.

You can see the dog and duck together on some videos and photos posted on Jacquie’s Facebook account. For example, walking around or curling up on the patio. The dog even gave his bed to Donald to sleep in!

Litton is truthfully grateful the bird appeared in George’s life to make him happy again. She assures she’ll be providing all the care Donald deserves. She will do all the necessary changes on her Tennessee home so the duck feels the most comfortable as possible.

More stories about dogs and ducks

Although the most common stories are about mothers adopting babies from another species to raise and nurse them as her own. The friendship between dogs and ducks also has some precedents reflected on the media.

For example, Pikelet and Patty Cakes are two dogs that were adopted by a family who volunteered at an animal shelter. As of that moment, they found love and affection.

Maybe that’s why the dogs started instantly taking care of the two ducklings after the dog owners brought them to the house while searching for a permanent home for them. Despite the size difference, there was no problem when they played, ate, and slept together.

Additionally, the harmonious coexistence among dogs, ducks, and cats is possible. This is the case of Roxy, Edith, Mia, Rose, Gertrude, Donald, and Jack; the four dogs, two birds, and a cat that make up Kasey’s non-human family.

This lady rescued these animals from different situations of abuse and abandonment. The relationship among them is completely harmonious, despite the fact that one of the dogs was used for illegal fights.

Love, care, and respect towards all beings seems to be the recipe for different species to live peacefully together. We humans should learn something from this, since we can’t even get along well with our peers.