Did You Know that the Color of A Dog's Collar Can Tell You About His Personality?

Did you know that the color of a dog's collar can tell you about his personality? 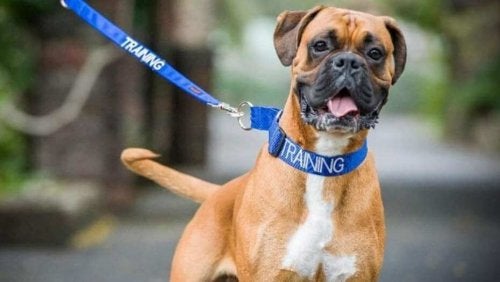 If you look beyond fashion and a dog owner’s choice of collar, you may see some accessories that are used to show a dog’s personality. These collars are really interesting and effective! Don’t think twice about using them on your pet.

If you go to a horse stable, you may notice that some horses have red ribbons on their tails. This is signal means these horses usually kick those who approach them. This warning keeps people out of danger’s way and keeps the animal calm and undisturbed.

This color code has now been adopted into dog collars. They are used to “advice” people about the animal’s personality.

This fashion started with a yellow ribbon, which was tied to a dog’s leash, neck or collar. This signal became popular due to a non-profit organization, called “The Yellow Dog Project,” which was established in September 2012. Its goal was to get people to ask permission from pet owners to pet their dogs … Especially, if it was alright for children to pet their dogs.

In a short time, this project became popular worldwide and now 40 counties are doing it. By using a yellow bow or leash, people who pass by will know if the dog is aggressive with other animals, if he doesn’t like children or even if he gets agitated by people of certain height.

The Yellow Dog Project tries to raise awareness for people to respect dogs’ personal space.  Dogs need their personal space due to several reasons:  training, recovering from medical treatment, has been abused, doesn’t like strangers or maybe the dog is a female in heat.

According to the foundation’s directors, dogs need to have their own place. Dogs are not usually aggressive “for no reason at all” — more likely, dogs are aggressive because they’re afraid, feel pain or have been rescued from a shelter. Perhaps aggression comes from animals that used to live on the street, that are in service or still haven’t learned to obey their owner.

The organization clarifies that using the yellow bow doesn’t imply an owner doesn’t have to avoid training his/her dog. If it was like that, there will be need to explain to others how to interact with your animal.  At the same time, people shouldn’t feel guilty or ashamed about their pet’s behavior.  This project is a success in Western Europe North America and Australia. It still has to reach South America, Africa, South Asia and Eastern Europe.

In addition to the yellow bow project, the Friendly Dog ​​Collars company has the objective of adding more tones to explain certain pet behaviors. They sell collars, harnesses and leashes of every color. Likewise, the attitude of the animal is specified in wording.

Jon Saville is the founder of the company. He owns a Staffordshire Bull Terrier (a breed that can be considered dangerous), and he got tired of hearing prejudices of people passing by when going on walks with his dog. Therefore, he decided to make these accessories, which have been a success among animal owners worldwide. It is a way to educate and raise awareness and teach pet lovers.

The code or simple traffic light system gives the dogs a “voice” with which explains their personality. This makes going on walks on the street or in parks peaceful for the animal, owner and strangers. The meanings of the colors are: